Atopic Dermatitis Update: AD is More Than One Disease

It is widely recognized that the severity of atopic dermatitis (AD) can range from mild-to-moderate-to-severe, even though all patients demonstrate common features of dry, itchy and inflamed skin. Yet, while it is customary to consider it as a single disease of varying severity, AD is actually an umbrella term for a family of inherited disorders, often due to completely different mutations (Fig. 1). The type of mutation can also provide clues as to why disease severity varies from patient-to-patient. Best known and most closely associated with AD are mutations in the gene (FLG) that encodes the protein, filaggrin. Filaggrin (FLG) is a key contributor to the integrity of the permeability barrier. AD patients who carry two FLG mutations tend to have more severe disease than do patients who have inherited only one FLG mutation, and these so-called double- allele patients also often develop problematic dry skin and a variety of ‘eczema’ as adults. But it turns out that FLG mutations occur much more commonly in patients of northern European ancestry, than in AD patients of either Asian or African-American extraction. These populations usually have other associated mutations (Fig. 1).

Despite abundant evidence that darkly-pigmented skin displays superior barrier function in comparison to lightly- pigmented skin 1, African-Americans can exhibit very severe AD. One might ask: how could they have severe AD, if dark skin has a better barrier? In contrast to AD patients of northern European extraction 1, AD in African- Americans is often linked to another gene (FLG-2), which encodes a protein called filaggrin-2 (FLG-2) (Fig. 1). While FLG-2, like FLG, also impacts barrier function, it does so by unrelated mechanisms. 2 Hence, AD in African-Americans displays a different inherited basis, which could explain, at least in part, the more severe form of AD that can occur in these patients. Alternatively or in addition, many African-Americans live in crowded urban, rather than in dispersed, rural settings, which can favor the development of more severe AD 3. AD patients that live in crowded urban settings are not exposed to environmental antigens that induce immune tolerance. Nor do they receive as much ultraviolet-B light exposure, which at moderate doses enhances barrier function and antimicrobial peptide production. In addition, AD can emerge under crowded conditions due to prolonged dust mite exposure. Finally, the prevalence of secondary bacterial infections, a common AD ‘trigger,’ also could be higher in many African-Americans due to more crowded living conditions. Thus, both genetic and cultural differences could account for the severe AD that occurs in some African-Americans, despite the fact that dark pigmentation in general confers a better barrier.

Then, there are AD patients with mutations in a group of enzymes (proteases or their inhibitors) that regulate stratum corneum shedding. For example, the rare inherited disorder, Netherton syndrome, is due to mutations in SPINK5, which provoke a form of AD that is usually much more severe than is AD associated with FLG mutations. In Netherton syndrome, the deficient gene product is a protease inhibitor (LEKTI), which when absent, unleashes a flood of proteases that provoke a particularly severe form of AD 4 (Fig. 1). Thus, AD patients with a wide variety of seemingly unrelated mutations can exhibit eczematous skin changes, including often severe itching, and an increased tendency to become colonized by pathogenic bacteria, particularly antibiotic-resistant strains of Staphylococcus aureus. 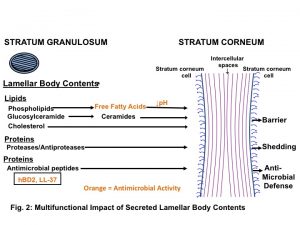 How can we explain that totally-unrelated mutations produce a similar (i.e., AD-like) clinical picture (or ‘phenotype’)? In a recently-published perspective in the J. Allergy Clin Immunol (http://www.ncbi.nlm.nih.gov/ pubmed/25131691) 2, we point out that these seemingly unrelated mutations all converge on (and compromise) the lamellar body secretory system (Fig. 1). Lamellar bodies are small, ovoid, subcellular particles or ‘organelles’ that deliver the lipids (fats) and proteins needed for a competent barrier to the outermost layers of skin, the stratum corneum. These lipids lie between the cells of the stratum corneum, where they form a repeated series of membrane sheets that provide the skin barrier (Figure 2). Once positioned there, these lipids and proteins regulate at least 3 key skin functions: 1) the permeability barrier; 2) antimicrobial defense; and 3) the ultimate shedding of stratum corneum cells from the skin surface 5. In other words, patients with AD have inherited a variety of different mutations, but in all AD patients, the disease displays a related pathogenesis — either defective delivery or premature degradation of lamellar body contents necessary for the permeability barrier, antimicrobial defense and normal desquamation (shedding). Together, these observations support the deployment of barrier repair therapy, a logical step to overcoming the genetic predispositions that converge to produce the clinical features of AD. 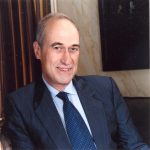 Dr. Elias is Professor (Emeritus) of Dermatology at UC San Francisco, and a Staff Physician at the San Francisco Veterans Administration Medical Center His laboratory is located at the new UCSF Medical Center at Mission Bay. Dr. Elias earned his undergraduate degree at Stanford University and then went to UCSF Medical School, followed by a dermatology residency in the Harvard-Massachusetts General Hospital program.