Beyond the eczema rash 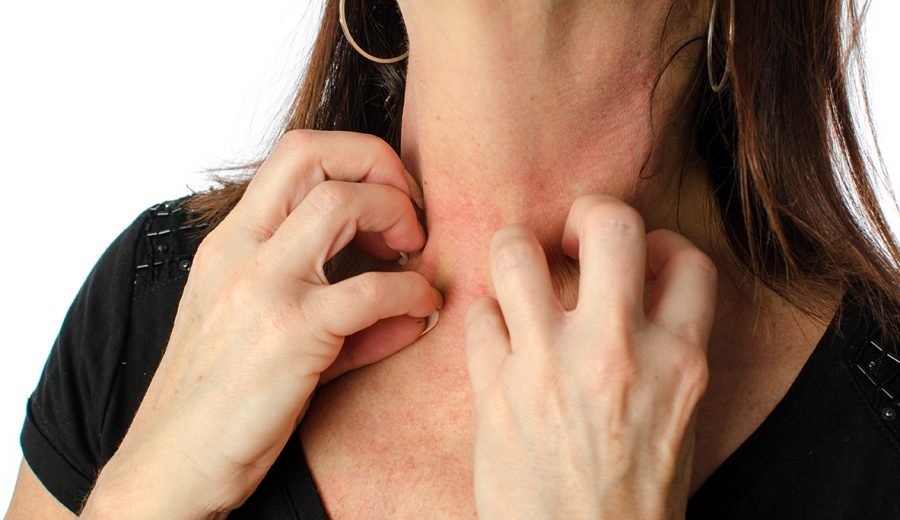 When we hear the word eczema, visions of red or dark, dry, itchy, inflamed patches of skin come to mind. After all, the eczema rash is a tell-tale sign of the inflammatory skin disease that affects more than 30 million Americans. But there is more to eczema than what meets the eye. Have you ever thought about what goes on beneath the surface of your skin to bring forth this annoying rash?

Why does exposure to certain things like household cleaners, pet dander or cigarette smoke trigger flares in some people with eczema, but not in others? And why is it common for people with atopic dermatitis (AD) to also have asthma, hay fever, food allergies, or a combination of all three? How are they connected?

While scientists don’t have all the answers yet, they are making strides in understanding the mechanisms of this disease. This has allowed them to develop advanced treatments like the first biologic for moderate to severe AD, which tackles inflammation at the cellular level.
Ready for some movie trivia? There was a 1966 science fiction film called “Fantastic Voyage,” starring Raquel Welch, about a submarine crew who shrunk themselves to microscopic size to venture inside an injured scientist to repair the damage to his brain. (If you haven’t seen it, you’re missing out!)

Join us as we take our own “fantastic voyage” and go beyond the rash and underneath the surface of the skin to better understand how eczema impacts our day-to-day lives.

Inside the tricky world of eczema triggers

People with eczema tend to have an over-reactive immune system. When triggered by a substance inside or outside the body, the immune system responds by producing inflammation. It is this inflammatory response that causes the itchy, painful, rash-like symptoms common to several types of eczema.

Types of eczema include: contact dermatitis, atopic dermatitis, dyshidrotic eczema, nummular eczema, seborrheic dermatitis and stasis dermatitis. It’s common for people to have more than one type of eczema simultaneously throughout their lives, especially those living with AD.
Eczema affects people uniquely. Each type of eczema has different triggers, symptoms and treatments. A substance that triggers eczema in a parent may not do the same to their child. That’s why it’s important to know what type of eczema you have and what substances triggered the flare-up so you can manage symptoms appropriately.

Keith Heeley, who works at a commercial real estate firm in Los Angeles, developed atopic dermatitis in his mid-20s. “I have really dry skin,” he described. “Sometimes I will get weeping on some of the open wounds where water will start pouring out. But by far the most frustrating part is the itch. It’s like having a bottomless itch that you can’t get to. You want to scratch to the very bottom of your being.”

According to Dr. Michael Wein, chief of allergy and immunology at the Florida State University College of Medicine in Tallahassee, there have been a “plethora of potential triggering factors” for eczema documented in scientific literature over the years.

These run the gamut from irritants and allergens you come in contact with through touch or inhalation to food allergies, microbial colonization leading to skin infections, changes in climate and temperature, and whether the disease runs in the family.

“I used to think our bodies were made with such brilliant resiliency,” Heeley said. “When eczema hit, I thought I could cure it with whatever lotion. As I got older, it just kept getting worse and coming back. I didn’t understand what it was for the longest time. When I learned that it is a widespread disease, it helped me come out of my sense of denial.”

The trick to identifying eczema triggers

Patch testing is a tool many doctors use to diagnose potential eczema triggers. In this test, allergists like Wein apply adhesive strips or “patches” to an eczema-free area of the back. The patches contain substances that are believed to cause irritation in people with eczema.

After 48 hours, the doctor removes the patches and inspects the skin for reactions. After two more days, the doctor looks at the patch sites for signs of inflammation. If there is inflammation, the allergy to a particular substance is confirmed.

“Most scientific evidence regarding trigger factors in AD relates to dietary exclusions or house dust mite avoidance strategies,” Wein said. “There is little consistency across studies in the type of diet evaluated, and indications for special diets were not always made clear. It is also unclear what role factors such as stress, humidity or extremes of temperature have in causing flares—just that these factors should be avoided where possible.”

“Maybe I need to tone down my stress level and think more calmly about tackling the problem,” he admitted. “I just knew that it had something to do with food and my digestive tract. I thought I tried all of the elimination diets, but I couldn’t find anything that correlated.

“Then a couple nights ago, I ate some honey-roasted peanuts. I’ve never had an allergy to peanuts, but boom! It just kicked in,” he lamented. “It’s so hard to isolate what’s causing it. You have to take it one day at a time with this disease.”

Don’t rely solely on medical providers to identify triggers. Empower yourself to do a little investigating of your own. Try tracking your triggers using a free app like EczemaWise or a notebook with a detailed log that addresses the following questions:

Watch out for these common eczema triggers

When you have eczema, you feel allergic to everything

Eczema and allergies go together like bread and butter or Batman and Robin. It’s rare to find one without the other. In fact, the word atopic in atopic dermatitis translates to allergy. AD can bring on a host of other allergic conditions: asthma, hay fever and food allergies. If you already have one of these conditions, chances are high that you’ll develop one or more of the others.

Almost half of people living with AD develop the tell-tale signs of allergic asthma: coughing, wheezing, shortness of breath and a feeling of tightness in the chest. About 75 percent experience symptoms of allergic rhinitis (hay fever): itchy, watery eyes, nose and throat; stuffy, runny nose; ear pressure and fatigue. Up to one-third have some sort of food allergy—most commonly, peanuts, eggs, milk or soy.

“Most patients are already family with allergen immunotherapy, also known as allergy shots, which can decrease symptoms for many people with allergic rhinitis, allergic asthma, conjunctivitis or stinging insect allergy,” Wein said.

“Allergy shots work like a vaccine. The body responds to injected amounts of a particular allergen, given in gradually increasing doses, by developing immunity or tolerance to the allergen.” Allergy shots are not used to treat food allergies, Wein specified. “Patients should base a decision regarding allergy shots on how much time each year is spent suffering with allergy, how well medications and environmental controls are helping, and whether the medications are too costly or causing side effects,” he said.

“Many patients with allergies can find wonderful relief with over-the-counter (OTC) treatment options,” Wein added. “If they cannot avoid the allergen, the FDA has approved several previously ‘prescription only’ medications for OTC use, including Flonase, Rhinocort, Claritin and Zyrtec.”

“I’ve been thankful that I haven’t suffered from asthma,” Heeley said. “I do get a lot of sinus pressure and head congestion when I’m around certain pollens. It would affect my ability to think. One day, I took an antihistamine. It took all the pressure out of my head and made me feel alert, like I could actually function. I never realized I’d been walking around with sinus pressure for years.”

“Typically, the only way to lessen an allergic reaction is through desensitization, a process in which you gradually introduce small amounts of the allergen into your body,” Wein said. “That is how allergists can stop you from being allergic to pollen, mold, dust, cats or even venom.”

You could also take on allergies the old-fashioned way: by cleaning thoroughly and often to reduce the levels of pollen, mold, dust and pet dander lurking in the nooks and crannies of your home. Just be sure to wear gloves while cleaning to protect your skin from irritating chemicals and detergents, and a mask to avoid breathing them in.

Most allergists recommend purchasing a HEPA filter, but it won’t protect you from all airborne allergens, Wein warned. “Dust mite allergen, which is carried on larger particles that fall rapidly to the ground after a disturbance is much less responsive to a HEPA filter,” he said.

Wein also recommends investing in allergy pillow and mattress covers that act as a barrier against pet allergens. “Animal dander can stay airborne for hours,” he said. “Levels in homes without animals are generally much lower but can still be detected. Interestingly, sometimes the pet fur can collect pollen or dust mite allergens and act as a vector for another allergen, but my experience is that this is much less common.”

Always be on the lookout for mold. “Molds are tiny fungi, and the spores float through the air,” Wein said. “If you are allergic to mold, your immune system is overly-sensitive to specific mold spores and treats them as an allergen. Mold thrives in humid and damp environments. This is a real problem in Florida where I practice,” Wein said.

There are hundreds of types of molds, but the most common allergy-causing molds are Alternaria, Aspergillus, Cladosporium and Penicillium, he said. “In exceptional cases in which asthma is unusually severe, such as Alternaria species–induced asthma in the Midwest, it might be advisable to chat with your doctor. Also, buy a hygrometer!” Wein advised. That’s an instrument used for measuring water vapor in the air.

“The strategic placement of insecticidal bait—which is inexpensive, has low toxicity, and is widely available—resulted in sustained cockroach elimination over 12 months and was associated with improved asthma outcomes,” he said.

Heeley put it best when he called eczema a “stubborn” disease.  “It doesn’t know gender, age, lifestyle, race—it affects all kinds of people and doesn’t discriminate” he said. “Millions of people are touched by eczema. It’s had a huge impact on society as a whole, and it took me far too long to get my mind around the fact that this is a clinical diagnosis and a life-changing disease.

“We’re blessed to have organizations like NEA doing so much to help our community and doctors who really want to get to the root of this thing,” Heeley continued. “Hopefully in the future, people won’t have to go through what we’ve gone through. My heart wants to see a breakthrough so kids won’t have to grow up with eczema.”