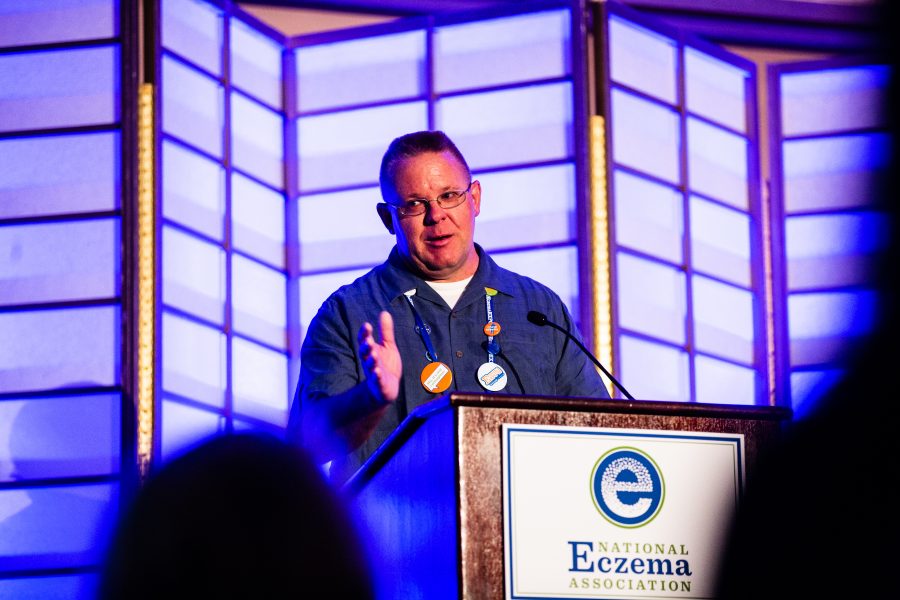 And while those who know him wouldn’t describe him as a shy person, “I was never one to do any public speaking,” Gawron admitted.

“Did I want to be in the spotlight? No. But I did it to show other people that they aren’t alone, especially the moms and dads with kids who will go through what I did with the bullying and the trial and error of allergy shots, food elimination diets, and always having to go back to the drawing board.”

Audience members may recall that the man speaking on stage at Expo ’18 had almost clear skin, with only 3 to 5 percent eczema left on his body. But less than two years ago, in January 2017, Gawron was hospitalized with one of the worst flare-ups of his life.

He had a staph infection so severe, “it looked like I was dipped in a vat of boiling acid.” It took six weeks’ worth of biweekly dermatologist visits to get Gawron’s staph infection under control.

At that point, he was already maxed out on immunosuppressants and oral steroids, and constantly slathering himself with topical creams and antibacterial ointments.

“I was like a walking pharmaceutical sample, and nothing was working,” he said. “Believe it or not, I started researching all the hotels on Long Island to see who had an indoor salt pool.

“I would book a hotel room, leave work, drive to the hotel, go in the room that I rented, change my clothes and go jump in the pool so nobody could see my condition, swim around for like an hour, get out and go back up to room, slather on all my garbage and drive home at 10 p.m. every night. I can’t tell you how costly and tiring it was.”

If there was such a thing as a “Severe Eczema Club,” Gawron would be an honorary member. He’s had atopic dermatitis (AD) since infancy with flare-ups so severe he’d have to soak his feet in order to remove his socks. And yet no matter how physically painful AD can be, nothing compares to the toll it takes on your self-esteem.

“Even my wife, Christine, when we were dating—and she was always 100 percent accepting of it—it would still be on my mind. I’d get up in the morning, look in the mirror and ask myself, ‘How can I go out today? I look like a tomato.’

“It’s the perception that people are going to think you’re some freak of nature, when in reality, they probably don’t even give it a second thought. That fear stems all the way back from your childhood.”

One of his earliest memories was being led to the nurse’s office scratching and bleeding, feeling hurt, angry and embarrassed by the schoolyard bullying. “I was called every name you can think of,” Gawron said.

“Scaly, alligator, cooties—that kind of garbage. Here I am at almost 50 years old and I can still hear the voices of the kids who called me names. It sticks with you for life. To think about what the kids are going through these days with the cyber bullying, I can’t even imagine it.”

Read all about eczema, bullying and self-esteem here.

You know your eczema is bad when you’re on a first name basis with your dermatologist. That’s been the case for Gawron, who recalled an extra bad flare-up eight years ago that led him to miss a week’s worth of work. He knew it was time to go back to the drawing board.

“My derm says, ‘Alright, Steve, we’re running out of tools in the toolbox.’ He started me on a mild dosage of methotrexate, and ever so slowly, it got larger until we maxed out. I was on the stuff for a good six years. I’d be like, “Ron, listen, I’ve been on this methotrexate. I want to cut back,” he said.

When Dupixent (dupilumab), the first biologic for AD, was approved by the U.S. Food and Drug Administration in March 2017, Gawron finally had a new tool in the toolbox.

“I ran to my doctor and said, ‘OK, buddy, let’s do this!’ Within 48 hours, I noticed a definite decrease in itchiness. By the end of the first month, I saw a remarkable improvement,” he said. “There were days when I forgot to put on moisturizer because my skin was so clear. It’s like a miracle.”

That’s why Gawron agreed to give his speech at Eczema Expo—to give others hope. “I just wanted to get up there as a regular Joe Schmo and say, ‘Hey folks, here’s my story. I’m not going to sugar coat anything. I’ll tell you how it is. This is what I went through. Here’s where I am today. Don’t let eczema define who you are. Be stronger than it.’

“We know many people with eczema exist, but meeting them is few and far between,” Gawron added. “That’s why events like Eczema Expo are so important. It’s common, but it’s never talked about. You never know if the person next to you has it.” 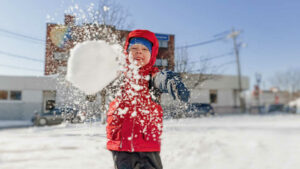 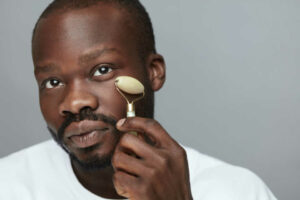