A tiny pill might offer big relief for eczema patients 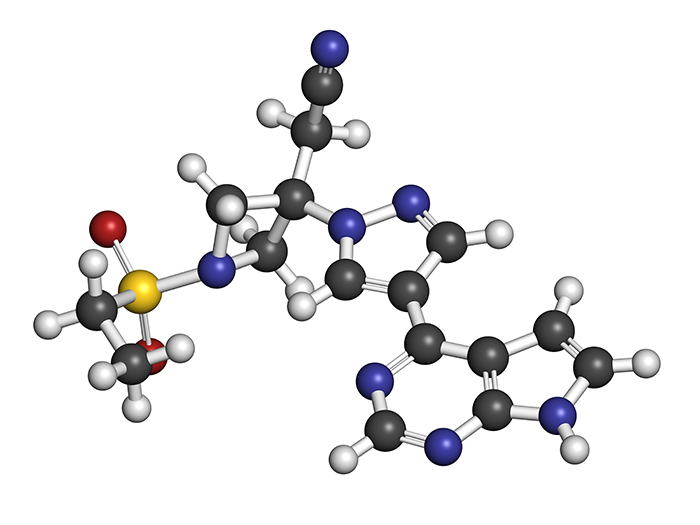 A promising, new oral treatment for atopic dermatitis (AD) was the biggest eczema news coming out of the 26th European Academy of Dermatology and Venereology (EADV) Congress. The annual event took place in September 2017 in Geneva, Switzerland.

Baricitinib was found to “significantly improve” the signs and symptoms of AD compared with the placebo arm treated with a topical corticosteroid alone, according to Dr. Emma Guttman-Yassky, who presented results from the phase 2 clinical trials to leading medical experts from around the world.

However, “I think this potentially provides a new oral treatment that can be used in moderate to severe patients with or without topical steroids,” Guttman-Yassky told a Dermatology Times reporter covering the event.

Baricitinib is a Janus kinase (JAK) inhibitor. JAK inhibitors are a type of medication that stop the activity of one or more of the Janus kinase family of enzymes. In the case of baricitinib, it impedes the enzymes JAK 1 and JAK 2.

How JAK inhibitors put the brakes on atopic dermatitis

JAK inhibitors have been effective at treating cancers and inflammatory diseases such as rheumatoid arthritis, but only recently have they been considered for the treatment of skin conditions such as AD. For maximum effectiveness, more dermatologists are prescribing the use of systemic treatments, such as JAK inhibitors, in conjunction with topical corticosteroids for the treatment of moderate to severe AD.

The most common side effects in the group treated with baricitinib were headaches, common colds and upper respiratory tract infections. “Overall, the drug was very well tolerated,” said Guttman-Yassky, adding that a phase 3 clinical trial for baricitinib is now in the planning stages.

More research: A medical doctor and researchers in the cannabis industry explain the science behind cannabis as a potential treatment for atopic dermatitis