How to identify and control eczema triggers without losing your mind 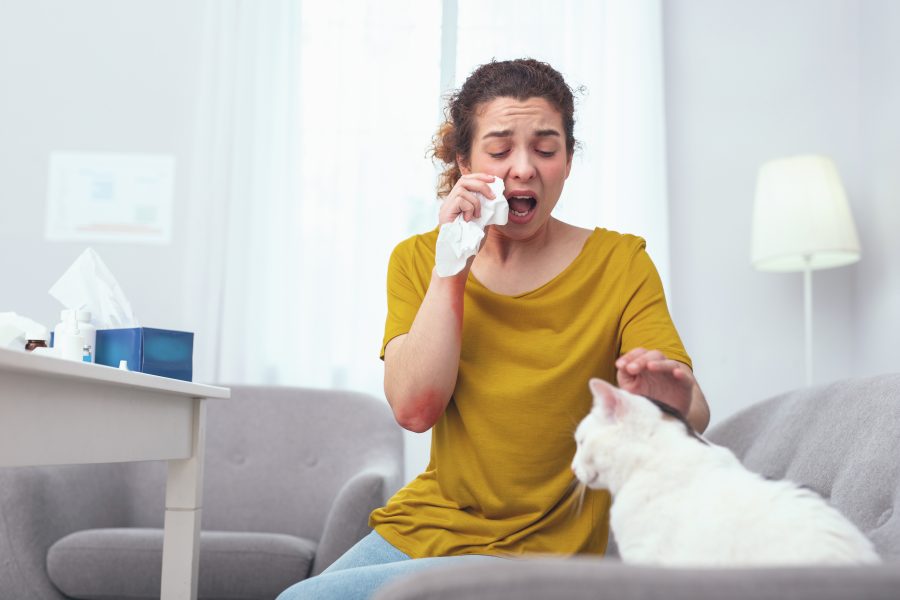 Paige Goff has been living with atopic dermatitis (AD) since age 6.

It started with itchy outbreaks in the inner crease of her elbows and behind her knees. During her teens, when she was at her most self-conscious, her eczema moved to her face—most visibly on her upper lip and the bridge of her nose.

Goff also has two comorbidities (or related health conditions) of AD: food allergies and asthma. These conditions each come with their own set of triggers and vary from individual to individual.

The weather is a major disrupter of Goff’s skin, from cold, dry air in the winter to heat and humidity in the summer. Her eczema also tends to flare in response to irritants in personal care and household products.

“Product additives are far more plentiful today than they were in the past,” said Dr. Lynda Schneider, director of the Allergy Program at Boston Children’s Hospital and professor of pediatrics at Harvard Medical School.

The sheer number of products on the market—along with what’s in them—has skyrocketed. This makes it difficult for people with eczema to identify which ones might be problematic for them or for their children with the condition, she explained.

What’s more, Schneider added, many of today’s product ingredients are plant-based—in other words, “natural.” But “plant products are anything but innocent. In fact, when you see the words ‘all natural’ on a product label, that’s the time to double down and do your homework.”

Get into the reading habit

Schneider encourages her patients to get into the habit of reading labels, especially before spending money on a product that might end up aggravating their eczema.

Now 28, Goff developed the reading habit in her late teens, when she discovered that she was allergic to a plant ingredient known for its healing properties: aloe. “Aloe is in everything, so I’m always on the lookout for it in the products I buy,” she said. “My skin hates coconut oil too.

“I never assume that a product is OK, even if it’s organic and even if it comes highly recommended,” Goff continued.

Spot-checking is another “must” when trying out a new product, Goff said. “Just apply a little on a trouble spot, wait a couple of days, and see whether you have a reaction.” She also does her best to isolate a potential trigger, never trying more than one new lotion, detergent or food at a time.

The problem, she said, is that you can’t know how your body will react to new things unless you actually try them. For her, living a full life involves a certain amount of risk, whatever the state of her eczema. Finding the right balance between risk and caution has become a lifelong pursuit for Goff.

“I refuse to become a prisoner of my skin,” she said. “I want to experience life, and I can’t do that if I become so fearful that I avoid everything all the time.”

8 tips from a top pediatric allergist

Schneider, a pediatric allergist, urges parents to be vigilant when it comes to identifying and eliminating irritants and other triggering factors that might cause their child’s eczema to flare. Here are eight of her top tips:

Schneider also urges patients of all ages to practice good stress management. For parents of young children, this means practicing good sleep hygiene for the whole family. And for parents of older children, it’s about making enough time for play and rest. Teens also need time to relax.

“I highly recommend using sleep tapes,” she said. “They’re remarkably effective in all AD patients, except the very youngest children. And adults should ideally practice some form of mindfulness or meditation to reduce their stress.”

Above all, she said, stick with what works. That goes for products, routines, diets and keeping household allergens at bay.

However, keep in mind that AD is a notoriously unpredictable disease, and its triggers can change over time as well. Despite your best efforts to avoid the irritants and allergens on your list, your AD can still “decide” to flare any time.

During a flare, consider eczema bootcamp

If you or your child experience a flare that won’t quit, Schneider suggests trying a “bootcamp” approach. That’s her term for an all-out mobilization against eczema.

At her pediatric treatment center, a multi-disciplinary team is available to guide parents and children through the maze of treatment options, including bleach baths, wet wrapping, frequent and consistent moisturizing and, of course, trigger avoidance. Topical medications can also be part of the mix when appropriate.

“At our eczema bootcamp, doctors and other healthcare practitioners work with families to bring a flare under control and prevent the next one—to the extent possible,” she said. “Education is key. It can take time, patience and repetition to explain why it’s necessary to apply moisturizer every day, even when a child’s skin looks good.

“Tracking and avoiding triggers is the other half of the equation,” Schneider continued, “and that requires education too. At a certain point, bootcamp ends and families go back to their lives, armed with a whole basket of strategies. I’ve seen it work time and time again!”

Beyond personal and household products, Goff works overtime to avoid her other eczema triggers—for example, sweat. She deals with it by showering quickly and moisturizing immediately afterwards.

“I love hot showers, but they don’t love me back,” Goff said. “A lukewarm one will do the job without stressing my skin.”

According to Dr. Matthew Zirwas, a dermatologist in Columbus, Ohio, with a long-standing research interest in AD, several studies have shown that some people with the condition are actually allergic to their own sweat.

“More specifically,” he said, “they may be allergic to biproducts made by a type of yeast called Malassezia that lives on their skin and thrives in sweat.

“Of course,” he continued, “people can’t say, ‘I’m never going to sweat again!’ I put some of my patients with a ‘sweat allergy’ on glycopyrrolate, a drug that reduces sweating. It’s not the answer, but it can be of benefit. And some of my patients, especially those who exercise a lot, do well on high doses of an antihistamine, such as generic Claritin, taken an hour before a workout.”

Another common but poorly understood eczema trigger, he added, comes in the form of airborne allergens. These cause eczema to flare not because people are technically allergic to pollen, dust mites, pet dander, cockroaches or mold, but because these substances produce proteases—enzymes that break down proteins in skin cells.

In other words, airborne allergens don’t directly trigger an immune reaction in the skin. They cause trouble by thwarting the skin’s ability to protect itself in people who are genetically prone to AD.

Airborne triggers are among the hardest to avoid, much less treat, Zirwas said. He advises his patients whose eczema reacts to these substances to stick with the basics of daily bathing and moisturizing especially after spending time outdoors. He also recommends household cleaning techniques designed to reduce airborne triggers inside the home.

In Goff’s experience, it’s easier to avoid indoor triggers than outdoor ones. When her family moved from Pennsylvania to North Carolina—she was a teenager at the time—she developed an allergy to dogwood, which happens to be North Carolina’s state flower.

“It’s pretty hard to avoid a tree that’s in your face all the time,” she said. While not an eczema trigger in her case, dogwood aggravated two of her related health conditions: asthma and rhinitis.

Having recently moved to the Seattle area, Goff has adopted a wait-and-see attitude. So far, the West Coast’s air, water and plant life seem to agree with her.

The basics of life: Water, food and sun

In several population studies in the United Kingdom and Japan, the hardness of water has been documented as a factor that may drive eczema, especially in infants and young children, Zirwas said.

Although there is insufficient scientific evidence on the subject, he said he’s seen significant improvement in his patients’ eczema when a family moves to a municipality with softer water. Adding a small amount of water softener to a child’s bathwater can be effective as well, Zirwas added.

And then there’s food. For the most part, food is rarely a direct eczema trigger, Zirwas said, especially in people over age 5. Patients tend to believe that certain foods cause their eczema to flare, but the relationship between eczema and food allergies flows differently, he explained.

“Eczema actually aggravates food allergies, not the other way around,” he said, according to a recent randomized placebo-controlled study of food and AD. In the study, a variety of foods were tested in a group of eczema patients, but none made their eczema worse.

Zirwas also identified a lack of sun as a driver of eczema, especially in infants and young children. He cited a population study completed in January 2019 that found that children who developed eczema had half as much sun exposure as did children who didn’t develop the condition.

While inconclusive, the findings strengthened his decision to encourage patients and their families to get more sun—not to the point of burning but to derive the full benefits of sunlight and vitamin D synthesis.

“In the study, vitamin D3 supplementation alone failed to prevent AD,” Zirwas explained. “To stop the disease in its tracks, we all need the real thing.”

It’s important to remember that eczema is a disease that impacts people differently. What’s helpful to some may be harmful to others.

The National Eczema Association recommends that adult patients and parents of young patients consult with their medical providers to determine their individual needs and risks.

It’s all a guessing game: Part 2