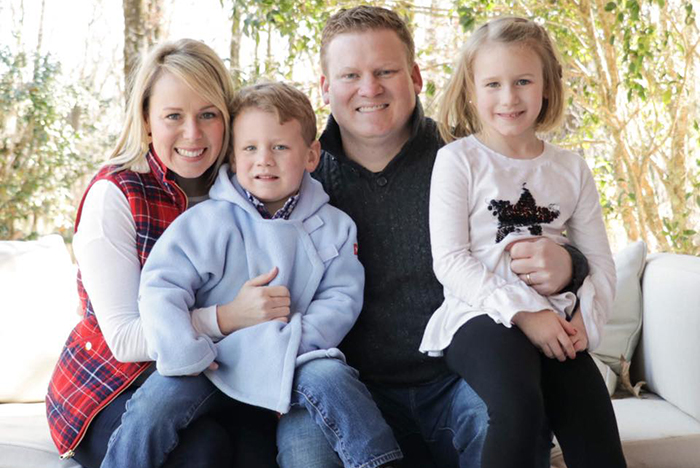 When Cara Ellis’ son, Walker, was born with eczema in 2012, nothing seemed to help her baby’s itchy, painful rash.

“We tried everything in the world we could get our hands on from over-the-counter creams and lotions to prescription steroid ointments,” she said. “I purchased all sorts of crazy things on the internet—companies claiming to have that one product that’s supposed to cure everything. But nothing seemed to help.”

Ellis began to wonder if the ingredients in her son’s personal care products were exacerbating his eczema symptoms instead of helping them. In her spare time, she started researching ingredients. “I used to be a school teacher, so I’m a nerd, a researcher by heart,” she said.

What Ellis discovered astonished her. “The United States has not passed a major federal law to regulate the safety of personal care ingredients since 1938. Consumers have no idea that it’s been that long since a major health protective law has been passed,” she said.

“We assume the personal care industry is regulated like the food industry, but it couldn’t be further from the truth. I was spending so much money on products making these claims that they were all-natural, preservative-free and dermatologist recommended. And I was trusting what they said. It infuriated me as a mother.”

This led Ellis to a new job as executive director at Beautycounter, a company that aims to spread public awareness about harmful chemicals in personal care products through The Never List™. The list bans more than 1,500 questionable or harmful chemicals—1,400 of which, Ellis added, were banned or restricted by the European Union, whereas the U.S. has only partially banned 30 to date.

“Through this, I’ve learned that consumers need to be their own advocates,” Ellis said. “Not only do we need to be advocating for our own health and wellness, but we also have to hold others accountable. This will help increase transparency between manufacturers and consumers.”

Since Walker’s eczema is what ignited Ellis’ passion for advocacy and safer personal care products, it’s no surprise that she and NEA were destined to connect. “It was serendipity,” Ellis said.

Tim Smith, Vice President of Advocacy and Access for NEA, knew of the advocacy work Ellis had done for Beautycounter and reached out to see if she’d be interested in advocating for NEA. The answer was a resounding, “Yes!”

First, Smith asked Ellis if she’d be willing to approach her elected officials and ask for a resolution declaring October 2018 Eczema Awareness Month in her home state of Tennessee. “I was familiar with the process and said, ‘Just give me the verbiage, and I will make it happen,” she said.

Ellis, who happens to live in Nashville, her state’s capital city, requested an in-person meeting with her representative and senator, which she was granted. She said she was delighted by how receptive her elected officials were.

“They want to hear our stories,” Ellis said. “They want to know the things that drive their constituents. I told them that eczema is an illness that affects every demographic, no matter the age, race or gender. All of these people are your voters.

“I said that we need to take the time to bring more public awareness around eczema to break the stigma,” Ellis continued. The lawmakers agreed. “They were willing to present a bipartisan resolution, and I found out that our governor, Bill Haslam, signed the resolution on April 12, 2018.”

In early May, Smith asked Ellis if she’d be interested in being one of three NEA advocates to attend a Derma Care Access Network (DCAN) meeting in Washington, D.C., and share her eczema story with policymakers.

“We were part of a panel to address the access-to-treatment issues that we’ve had with Walker,” Ellis said. “I spoke about step therapy, which is what happened when our insurance company required us to try a treatment out for a six-month period of time, even though our pediatrician knew this medicine was not going to work for us.

“I also spoke about the emotional and financial effects eczema has had on our family,” she continued. “It’s important to keep driving home the point that these experiences eczema families are having don’t always make it all the way to the key players that really should be hearing our stories.”

Ellis learned that she didn’t need prior experience in advocacy to make an impact on legislators or policymakers. “I don’t have a law degree, and until I was thrown into it, I thought you needed those things to make a difference in that arena,” she said. “In hindsight, I learned that all you need is your story and the passion to share it to truly make a difference.”