Eczema is a Real Character 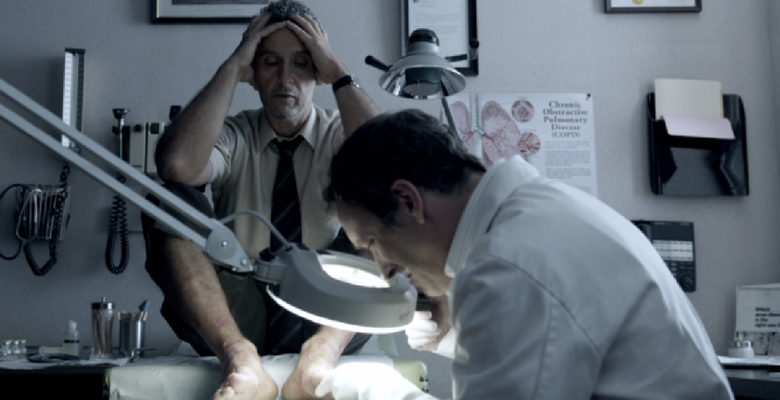 The HBO mini-series called “The Night Of” is about a complicated murder case set in New York City. It’s about the transformation of a young Pakistani-American man from a “nice guy” to a Riker’s Island criminal.

It’s also about eczema. And how this condition can affect every part of a person’s life.

“The Night Of” is based on the BBC series “Criminal Justice,” written by Peter Moffat. Moffat has atopic dermatitis (AD) and used his considerable experience with the disease to develop the John Stone character. When writers Richard Price and Steven Zaillian brought the series to the U.S. and amended it to become “The Night Of,” they decided to expand the role eczema plays in Stone’s life. In a recent interview about the show with The Huffington Post, Price said that eczema became “a metaphor for the frustrations of … the entire judicial system.”

The portrayal of a person with severe atopic dermatitis in “The Night Of” is as honest and sensitive as it is accurate. Viewers who struggle to manage their eczema will recognize some universal themes in the miniseries.

Eczema dictates what you can or can’t wear, regardless of the situation

People with eczema can have skin reactions from certain fabrics and laundry soaps. For some, friction on the skin from shoes or tight jeans can cause flares and pain. People with eczema are advised to simply avoid those fabrics and clothing types. But what if certain types of clothing and fabrics are essential to your profession?

John Stone is introduced often in sandals because the severe eczema on his feet does not allow him to wear closed-toe shoes. This is a source of shame for Stone, as he has to wear sandals in professional situations that require men to be in dress shoes. Moreover, Stone’s sockless, red, irritated feet in sandals draw at best, polite questions from others, and at worst, revulsion.

When Stone tries an herbal treatment that appears to calm his skin for a period, the first thing he buys for himself is a nice pair of dress oxfords. His joy when he removes the new shoes from their box and puts them on to attend court is transparent.

Eczema itch can be all consuming

One of the main symptoms of eczema is itch. According to Dr. Gil Yosipovitch, a dermatologist and member of the NEA Scientific Advisory Committee, eczema is the most common cause of chronic itch, with some 17 million people in the U.S. affected. Dr. Yosipovitch, an expert on itch in humans, says the itch from eczema comes from a different set of nerve fibers than the itch that happens when you come into contact with an allergen such as poison ivy or pet dander. These nerve fibers also may transmit pain, perhaps contributing to why so many eczema patients experience itch and pain together.

Like many people with severe atopic dermatitis, John Stone spends much of his waking hours scratching. He not only employs his nails to scratch but carries around a chopstick for hard to reach places such as his back and his feet. His compulsion to itch overtakes him no matter the situation. We see Stone scratching as he talks to his client Kahn in a jail cell and watch him claw at his chest and face in public and private. No relief and no reprieve from his nerve fibers gone haywire due to his eczema.

Finding a treatment that works is exhilarating. Losing that treatment is heartbreaking

See John Stone at the drugstore. See Stone standing in front of a shelf filled with dozens of bottles of over-the-counter formulas designed to help with eczema symptoms. See Stone get frustrated, grab a few bottles and slam them into his shopping basket.

Symptoms of eczema on the skin, such as redness, itching and dryness come from what is happening underneath. People get atopic dermatitis because their immune system goes into overdrive, mistakenly triggered by a combination of genes and the environment.

People with severe eczema often cycle though prescription treatments including rounds of steroids, immunosuppressant drugs and light therapy. Some people attempt to manage their symptoms through diet and supplements. But for many people, these treatments ultimately fail and the eczema symptoms return.

John Stone gives us a seat on the rollercoaster ride of finding a treatment that works. He finds an herbalist in New York City’s Chinatown, who prescribes him a powder to mix with water. Stone drinks this foul-looking sludge daily and after some time, his skin begins to clear.

He is exuberant — his itch is gone, his skin is clear and he can wear nice shoes. Stone talks about his new-found treatment with his eczema support group, where they pepper him with questions about his regimen.

But his clear skin is not to last. Despite taking the herbs as directed, Stone finds his eczema rushing back to cover his body, leaving him back where he started: in pain, struggling and depressed. From the high of finding something that works, to the crushing blow when it stops, John Turturro as Stone, takes us through every emotion in this process.

A sub-plot of “The Night Of” is John Stone’s relationship with a cat. The orange and white tabby originally belonged to the murder victim. Stone finds the hungry and lonely cat when looking for evidence at the victim’s apartment. He takes the cat to the pound, rescues the cat from the pound, brings the cat back to the pound, and then ultimately rescues the cat again (spoiler: permanently this time).

In “The Night Of” the cat may be a metaphor for Nasir Kahn and the story of incarceration and redemption. For someone with eczema, Stone’s adoption of the cat is a triumph of love over genetics. Or maybe, he was never allergic to cats to begin with.

Not all people with eczema are allergic to cats, although pet dander is a common trigger. The sure way to find out if you’re reactive to cats is to get a patch test through an allergist office.

However, before you get that kitten for your kids, research shows that infants and toddlers who have risk factors of developing an atopic disease such as a parent or parents with atopic dermatitis, asthma and/or hay fever should not have ongoing exposure to cats until they are older. Early exposure to cat dander may contribute to the development of atopic dermatitis in children who are prone to the condition.