Models with eczema get ready for their close-up 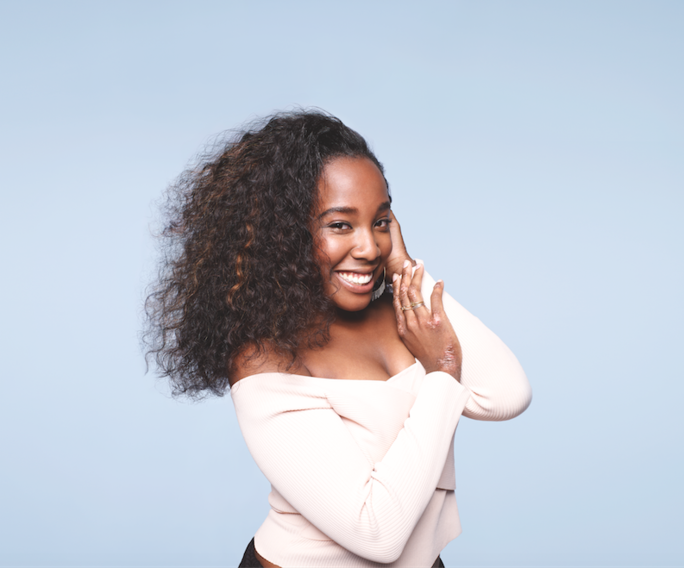 About a year ago, Alexis Smith received a surprising message via email and Twitter. A global skincare brand wanted to interview her by phone after finding her on Instagram (@eczemalove), and she promptly responded to that request.

Next, the brand representative asked Smith to tell her story in a short video, and once again, she followed through. The 21-year-old from Harford County, Maryland, soon learned that she had been selected as one of six women with skin conditions to be featured in Dove’s upcoming DermaSeries campaign.

Meanwhile, in Chicago, 23-year-old Mercedes Matz learned that she had been chosen as well. Matz had responded to an ad she spotted on Twitter. A mysterious global beauty brand was looking for women aged 20 to 60 with skin conditions to participate in an advertising campaign. When Matz learned that brand was Dove, she leapt at the chance to shed her insecurity and be seen in an entirely new light.

The beauty industry is changing. After decades of promoting a single standard—one that most of us have a hard time achieving—diversity has become the new industry watchword. It’s about celebrating all the ways in which we’re gloriously different from each other.

The DermaSeries campaign challenges women to “make peace with dry skin”—not just by using the Dove DermaSeries line of products, but by learning how to “feel comfortable in their own skin,” whether they have eczema, psoriasis or any other skin condition.

“For me, the idea is to normalize eczema,” Smith said. “I want people to see it so that they don’t feel eczema makes us ugly. That’s why I started my Instagram in the first place. Instead of just talking about how much it sucks to have eczema, I try to spread a positive message.”

And Matz does the same on her Instagram (@keystothecedes). “It’s about lifting up unconventional beauty,” she said.

“I feel like imperfections are real beauty. Eczema is one of mine, and that’s just what makes me unique,” Smith explained on the DermaSeries website. 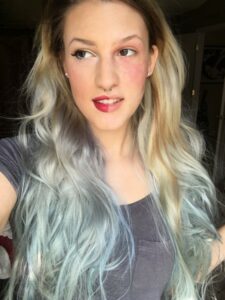 Many children and adolescents with eczema constantly deal with put-downs—and even in adulthood, those wounds still sting.

Smith can still recall the cruelty of her peers when she was in her teens. “I remember someone saying to me, ‘Hey, Alexis! You’ve got something on your face!’”

She has mild to moderate eczema now, thanks to red light therapy—a treatment that has worked well for Smith.

She had the condition as an infant, but she seemed to grow out of it until it came roaring back when she was 12, just in time for adolescence and the onset of painful self-consciousness. She longed to wear cute, backless tops and dresses, but the eczema on her back made her feel like that wasn’t in the cards.

Hundreds of miles away, Matz was on her own eczema journey. She had always done her best to conceal her inflamed skin. But the more she hid, the worse she felt.

“I built a wall to protect myself,” Matz said. “That wall has crumbled now. Being seen, first on Instagram and now in the DermaSeries ads, has been incredibly freeing. Instead of explaining eczema to every person who crosses my path, I get to tell my story all at once.”

Social media outlets have played a major role in helping Smith and Matz break through the stigma and their feelings of isolation. Both women said they have received a healthy dose of support from their followers on Instagram.

That sense of community was heightened during their trip to New York City for the Dove photo shoot. For three days, “We all bonded over our skin issues,” Smith said. “We went from ‘Don’t you hate it when you wear black pants and they get all flaky?’ to ‘How do you adjust to the feeling of being visible after so many years spent in hiding?’”

Adjust they did, and quickly! Smith saw herself in a Facebook ad for Dove DermaSeries just the other day. Matz, who was selected for the North American print ad campaign, has already appeared in O Magazine, Essence and CVS store displays.

Matz had a major epiphany during the photoshoot. When she mentioned how self-conscious she felt about the eczema on her hands, the women she met there told her they hadn’t even noticed it.

“All these years, people hadn’t even been paying attention to my eczema,” she said on the campaign website. Most of her fears around criticism and rejection, Matz realized, had been in her head.

“Now, I imagine a little girl with eczema seeing my smiling image in a pharmacy display,” she said. “I see myself in that little girl, and I imagine that she can see herself in me. It’s amazing to be able to be a source of inspiration for another human being.”

Since the start of the Dove campaign, Matz has continued to blossom. On a new treatment for the past two years, her eczema has gone from severe to mild, with “just a little hyperpigmentation here and there, but no open cuts or sores—and the medication has cut my pain and itch down to size,” she added.

Smith has returned to her job as a receptionist in her father’s physical therapy office, and Matz is back to being a freelance hair stylist. But their lives have changed forever. The Dove campaign has only just begun to spread its wings—and so have these two young women, eczema and all.