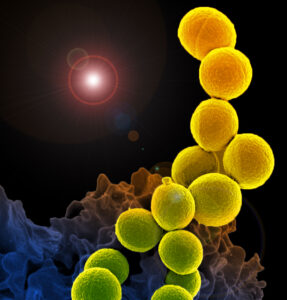 Interaction of a white blood cell with MRSA.

What are the signs and symptoms of MRSA infection?

MRSA infections can cause the same signs and symptoms  as an infection with other common skin bacteria. In other words, it is not possible to distinguish MSSA from a MRSA skin infection. But, generally MRSA skin infections are more dramatic with relatively rapid progression from a small pimple to a large, painful lump that may drain pus. It is possible with both MSSA and MRSA to have the infection spread beyond the skin and affect the heart, bone or lungs but, in people with healthy immune systems, this does not happen very often.

What do I do if I suspect a MRSA skin infection?

If you have symptoms of skin infections as described above, please see your doctor who will gather your medical history, perform a physical exam, and likely swab your skin for bacterial culture to identify the bacteria and determine what antibiotics are most appropriate to use to treat the infection.

How do the signs and symptoms of MRSA infection differ from other skin infections?

There is often no appreciable difference in signs/symptoms between a MRSA or MSSA skin infection. Your doctor will ask questions which may reveal if you are at greater risk of infection than the average person (see “who is most likely to get a MRSA infection” later in this article) but bacterial culture is necessary to determine whether an infection is caused by MRSA or other, antibiotic sensitive bacteria.

Is there an incubation period?

Incubation period refers to the time between exposure to a virus or bacteria organism that causes disease and signs/symptoms of disease. As with many bacteria, MRSA can live on intact skin without causing disease (this is called colonization).

With MRSA skin infections in the AD population, incubation period often does not apply (see below for a full explanation). For new exposure to staph resulting in impetigo, the typical incubation period is 2-5 days.

Many people with MRSA skin infections have been colonized with MRSA (had it living on their skin with no disease) for some time. This is particularly true with AD as 50-90% of AD patients are colonized by Staphylococcus aureus. The percentage of AD cases with MRSA is similar to what is found in the skin cultures from healthy subjects. MRSA skin infections can arise either with or without an obvious wound such as a cut in the skin, for example. AD subjects are thought to get Staphylococcus aureus skin infections much more because they are frequently colonized with the bacteria and their skin is often wounded within and around their eczema lesions.

How are MRSA infections treated?

MRSA has become common enough that most doctors treat bacterial skin infections with antibiotics that are effective against MRSA. Antibiotic regimens are best guided by results of the bacterial culture and sensitivity as well as local bacterial resistance patterns. Common antibiotics used to treat MRSA skin infections include but are not limited to: clindamycin, trimethoprim-sulfamethoxazole, doxycycline, or minocycline.

If a skin abscess (large, pus filled lump) is present, it will need to be drained. Assuming the abscess is small, some studies have shown that simply draining the lesion is sufficient and no antibiotics are needed to clear the infection. For larger abscesses, drainage should be followed with oral or IV antibiotics.

Bleach baths have been shown to improve AD in patients who have moderate to severe AD and a clinical appearance that suggests they have a bacterial skin infection. As with most AD patients, the patients in this study had a high rate of Staphylococcus aureus colonization. It should be noted that the intent of a bleach bath is to reduce, but probably not eliminate, Staphylococcus aureus on the skin. At present the studies currently available provide insufficient data to test this hypothesis.

Studies are ongoing to review the efficacy of some of the commercially prepared bleach body wash products. A pilot study does exist examining one of these new products but, as the authors of this study point out, it has significant limitations preventing us from drawing any definitive conclusions about this product at this point.

Who is most likely to get MRSA infection?

How is MRSA different from a staph infection?

Patients with atopic dermatitis (AD) have a markedly increased rate of colonization (presence of bacteria without an active infection) and infection with MSSA but not currently MRSA [1, 2]. There are a number of reasons we believe that AD patients are more susceptible to Staphylococcus aureus colonization and infection:

What are the prevention measures eczema patients should take? How can family members be protected? (How do I keep others from getting infected?)

In patients with AD, bleach baths are an excellent way of reducing MSSA and MRSA colonization and thereby theoretically decreasing the risk of Staphylococcus aureus skin infections and, for some, markedly improve their AD.

Proper hand washing remains the most important way to prevent the spread of MSSA and antibiotic resistant bacteria like MRSA. For a quick brush up on proper handwashing technique, please see http://www.cdc.gov/handwashing.

Why is MRSA infection on the rise?

MRSA colonization is on the rise (due to improper antibiotic use on the part of both patients [e.g. failure to finish entire medication regimens] and physicians [e.g. prescribing antibiotics when it is not warranted, as with most ear infections]) which, in turn, makes it more likely that a given Staphylococcus aureus infection will be caused by MRSA not MSSA.

Why does NEA think this is important education for all those affected by eczema to have?

The increased susceptibility of AD patients to skin and soft tissue infections with Staphylococcus aureus makes this an important topic to review with AD patients and their families. The importance of this topic is further underscored by the continued rise of MRSA and other antibiotic resistant bacteria.