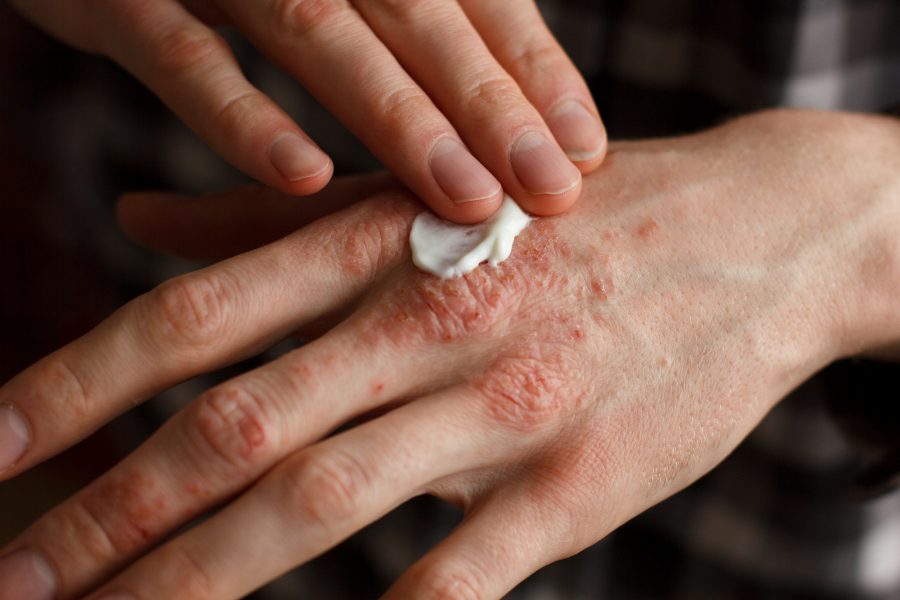 Atopic dermatitis (AD) is one of the most common chronic inflammatory skin disorders, affecting up to 20 percent of children and 10 percent of adults.

The leading theory is that a disruption in the skin barrier in patients with AD leads to increased permeability of the epidermis (the top layer of the skin), uncontrolled inflammation in the skin, increased sensitivity to allergens, and disruption of normal skin flora—the microbes that live on the surface of the skin.

These problems culminate in the common symptoms of AD: itching, dry skin, thickening of the skin, and so forth.

The approach to treating patients with AD is often multi-pronged. The main goals of treatment are to decrease itching and pain, dampen the skin inflammation, repair the skin barrier and restore healthy skin flora.

A treatment regimen for AD may include several different modalities such as steroid creams or ointments, bath additives and lifestyle modifications that contribute to the overall goals of care.

In the last decade, several patient reports published in the scientific literature have found that lower than standard doses of the drug naltrexone, known as “low-dose naltrexone” (LDN), has the potential to improve both itch and inflammation in many conditions.

Naltrexone is an opioid antagonist—it blocks the receptors that opioids such as morphine or heroin bind to—and was first approved by the FDA in 1984 to treat opioid addiction at dosages of 50-100 mg per day.

These standard doses have been termed high-dose naltrexone (HDN) in scientific literature. On the other hand, low-dose naltrexone (LDN) refers to dosages of naltrexone that are approximately 1/10th (i.e. 1 – 4.5mg daily) of the typical opioid addiction treatment dosage.

Perhaps because of its long duration of action, the constant activity of HDN actually seems to increase inflammation in the body and stimulates the immune system to produce immune cells, inflammatory substances, and other mediators.

Conversely, LDN has a much shorter duration of action and its intermittent activity in the body appears to activate alternate pathways, such as the opioid growth factor receptor axis, which actually decreases immune cell production and stimulating anti-inflammatory mediator release.

Basically, HDN appears to rev up the immune system, while LDN acts paradoxically to block immune system overactivity. This makes it very interesting for those with inflammatory problems such as AD.

In the past, low-dose naltrexone (LDN) was successfully studied as an anti-inflammatory treatment in conditions including Crohn’s disease, fibromyalgia, major depressive disorder, cancer, complex regional pain syndrome, and multiple sclerosis.

A few small cases have been published describing the use of LDN in skin conditions and these have had mixed success when looking at itch, severity, and physical lesions. It is notable that across all the reports patients tolerated the LDN treatment well, and the only adverse events were mild dry skin and vivid dreams in some patients.

Could LDN help with atopic dermatitis?

Given that inflammation and itch are important treatment targets in atopic dermatitis, LDN’s potential applications in AD are tantalizing.

Unfortunately, there are not yet any case reports or trials on the oral form of LDN in atopic patients. However, topical application (e.g. creams, ointments) have been tested in AD patients.

Interestingly, it is known that patients with AD have decreased levels of opioid receptors in their skin, and this is thought to potentially contribute to the itching and inflammation.

One study found that topical naltrexone actually increased the number of opioid receptors in the skin leading to better relief of itching when compared to a placebo. Another trial of topical 1 percent naltrexone led to 29 percent improvement in itching in patients with severe AD after just two weeks.

These trials suggest that LDN increases opioid receptors in the skin, thus improving itch symptoms. Further studies are needed to create and refine an optimal method for LDN delivery to the skin and to better understand how and where it will best work.

Several trials and patient case reports have shown variable responses to oral HDN in AD. In one small report of four patients, only one patient achieved full remission of their itching after starting HDN. A follow-up study showed improvement in itch in about half of patients, further suggesting a mixed response to HDN.

These studies prompt the following questions: Could LDN lead to even better outcomes? Additionally, does low-dose naltrexone decrease the pleasure derived from scratching an itch or the itch sensation itself? Again, further studies are needed to shed light on these notions.

Despite the increasing use of LDN by some practitioners and recent interest from the scientific community, there are still many unanswered questions. LDN remains unproven and unapproved by the FDA.

However, given that oral and topical naltrexone (at varying doses) have been shown to improve itch in patients with AD, LDN is certainly an emerging potential treatment that merits further study.

Confirming prior study findings, elucidating the mechanism of action for LDN in AD, and performing trials of oral LDN in AD patients are a few potential directions for future research.

Until more evidence becomes available, doctors and patients must continue engaging in dialogues to weigh the risks and benefits of more experimental treatments such as LDN.

Why Does Eczema Itch?