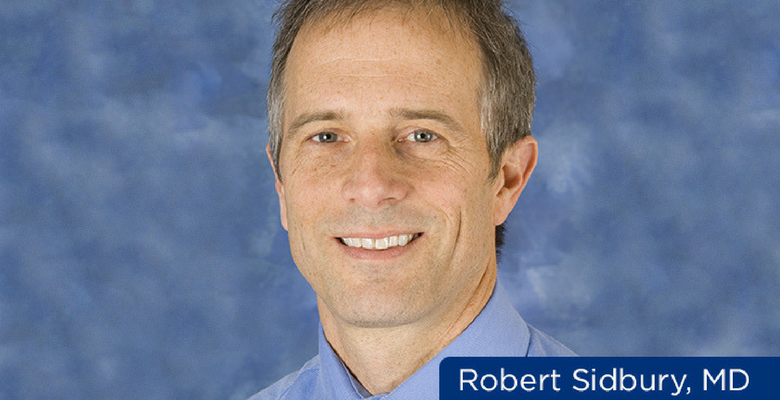 2016 was a busy year for eczema research

Currently, there are more than 40 therapies in development for eczema that have the potential to help symptoms such as itch and redness, improve the skin barrier and calm the immune system. Scientists are also looking at how eczema affects the everyday life of the people who have the condition.

There are different kinds of research when it comes to eczema. There is scientific research that tries to understand the mechanics of the disease, such as, why eczema is so itchy. Other studies look at how the disease impacts people beyond its direct physical effects. Are people with eczema more susceptible to other health risks, such as depression or heart disease?  Or what kind of quality of life consequences do people with eczema experience? Finally, there are clinical trials of new treatments to evaluate efficacy in treating disease symptoms, as well as identify potential risks, leading to safer, more effective treatments for eczema, or even a cure.

We asked Robert Sidbury, MD. FAAD, division chief of dermatology at Seattle Children’s Hospital in Seattle, Washington and co-chair of NEA’s Scientific Advisory Committee to identify some of the 2016 research highlights. Here are his top five:

Biologic drugs are made from proteins that are derived from human DNA and can inhibit parts of the immune system that cause inflammation, which plays an important role in atopic dermatitis. These drugs are already being used to treat conditions including rheumatoid arthritis, psoriasis and cancer.

This phase III trial included two identical studies of adults with atopic dermatitis and indicated that dupilumab improved the signs and symptoms of AD, as well as symptoms of anxiety and depression, as compared with a placebo.

An application has been filed with the FDA for the approval of dupilumab to treat moderate to severe atopic dermatitis. If approved, it is expected to come to market in 2017.

The impacts of atopic dermatitis go beyond disease symptoms such as itch, pain, and inflammation to include sleep disturbance, economic burden, social and psychological issues, and decreased productivity at work or at school. It is important to understand the findings of existing research and identify where additional research is needed.

Key findings from this analysis included:

This research was supported by a grant from the National Eczema Association. NEA is using these findings to develop its research priorities for 2017.

Atopic dermatitis is associated with ADHD

People with atopic dermatitis are more likely to develop other diseases. Often called “comorbid conditions,” the most common of these include asthma, hay fever, other forms of eczema such as seborrheic dermatitis, staph infections, and depression.

This study examined survey data surveys from 354,416 children aged 2-17, and 34,613 adults. The analysis found that both children and adults with atopic dermatitis were at an increased risk for developing attention deficit hyperactivity disorder (ADHD). This risk was further increased among people with AD who also had certain other conditions, such as asthma or insomnia.

Clinical trial studies revealed that crisaborole, topical ointment that works on reducing inflammation by controlling the production of the PED4 enzyme, to be a safe and effective treatment for people with mild to moderate atopic dermatitis.

Following the publication of the results of this clinical trial, an application was filed with the Food and Drug Administration (FDA) for approval. On December 14, 2016, the FDA announced crisaborole, with the brand name Eucrisa, was approved for the treatment of children and adults with mild to moderate atopic dermatitis.

Atopic dermatitis is a chronic form of eczema that exists with two other allergic conditions, asthma and hay fever. People who have asthma and/or hay fever, or who have family members who do, are more likely to develop atopic dermatitis.

While this study did not specifically consider atopic dermatitis, it examined whether children who suck their thumbs or bite their nails have a lower risk of developing atopy, asthma and hay fever because those habits could increase exposure to microbes.

The study paired parents’ reports of their children’s thumb-sucking and nail-biting habits at ages 5, 7, 9 and 11, with skin prick tests given at ages 13 and 32 years. The results of the study indicated that when tested at both age 13 and age 32, individuals who had one or both habits were less likely to develop an atopic sensitivity, or allergic reaction, than those who had neither habit. The study did not answer the question of whether these habits reduced the incidence of asthma, hay fever, or AD. 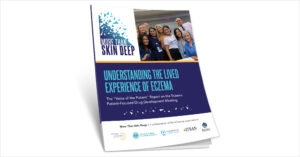 Released on March 18, 2020, the “More Than Skin Deep” Voice of the Patient Report radically expands our understanding of the lived experience of patients an... 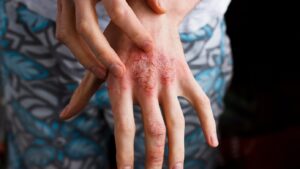 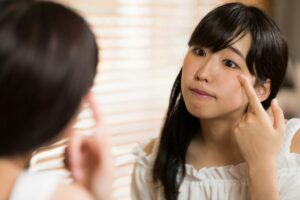 In this edition of Ask the Eczperts, we asked Dr. Peter Lio to discuss eyelid eczema, the relationship between eczema and microbiome, and probiotics....