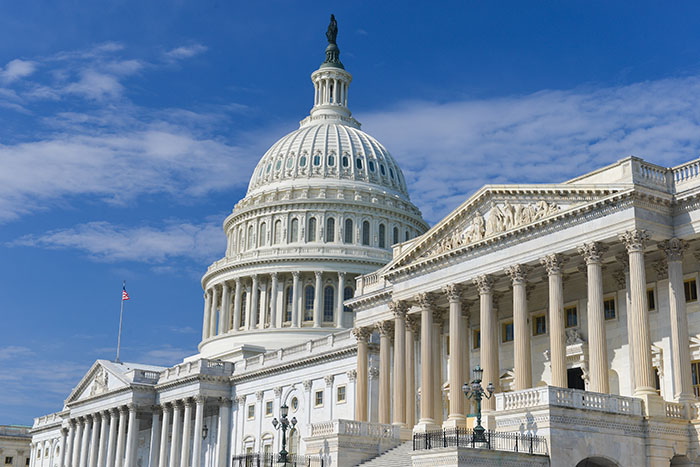 The National Eczema Association (NEA) is committed to representing the interests of eczema patients on the frontlines of Washington, D.C. This year, we will continue to work with federal lawmakers to ensure those interests are served. Our main goals are to increase awareness of eczema as a public health issue and to protect and improve access to services and medications for people whose lives are impacted by this disease.

Federal lawmakers returned to a packed legislative agenda on Jan. 3. Many of the policy proposals they will consider in 2018 could have a major impact on the health coverage options and rights of eczema patients across the U.S. This includes funding for federal agencies that conduct and fund research into finding cures for diseases like eczema and atopic dermatitis.

Congress’s first major task will be to enact a package of spending bills to fund the government’s operations through the fall of 2018. The government is currently funding its operations under a continuing resolution, which is a short-term funding bill that carries 2017 spending levels over for a month while Congress is in recess.

Passing a federal spending package will require a major political lift, as members of both parties struggle to find a compromise in the wake of the recently enacted tax reform bill.

Pres. Donald Trump signed the Tax Cut and Jobs Act of 2017 (P.L. 115-97) into law on Dec. 22, 2017. In addition to changing major sections of the tax code, the bill repealed a previous law that required most Americans to have health insurance or pay a tax penalty.

Opinions of the bill divide sharply along political lines. Whereas the tax bill’s Republican supporters argue that the repeal was necessary to relieve health insurance consumers of the financial burden imposed by the individual mandate, Democrats counter that this change will spell disaster for health insurance programs serving lower income Americans.

What does this mean for people with eczema? Political overtones aside, it is important for you to know how this bill might impact you, depending on where you live and how you get your insurance.

How will this affect my insurance coverage?

The Congressional Budget Office (CBO), which prepares official estimates of federal policy proposals under consideration in the legislative process, estimates that the statutory changes enacted by the tax reform bill will cost the federal government approximately $1.5 trillion over the next decade in lost tax revenues.

This shortfall could present a major hurdle to finding consensus within the ranks of the Republican majority, as deficit hawks wrangle with other Republican party members who are pushing for massive increases in defense and transportation spending.

CBO officials also estimate that this may increase the number of uninsured people by 4 million in 2019 and up to 13 million in 2027, mostly in the individual insurance market and mostly due to voluntary dis-enrollments.

These changes, in and of themselves, probably won’t have a direct impact on patients with chronic diseases like eczema, most of whom receive their coverage through their employers. But, the CBO’s analysis also finds that the elimination of the individual mandate could drive up private insurance premiums by as much as 10 percent.

The CBO predicts that those who choose to dis-enroll will likely be young and healthy, which in turn will mean that the people who remain insured will be older, sicker and more expensive to insure. However, whether you feel the bite of a premium increase will depend on the type of coverage you purchase.

How does my location come into play?

There is also a possibility that newly uninsured people could have a negative impact on the nation’s health care infrastructure. Uninsured people are considerably more likely than insured people to seek medical care in expensive care settings, like the emergency room.

The Patient Protection and Affordable Care Act (ACA), often referred to as Obamacare, which implemented the individual mandate, also cut funding for public hospitals. Public hospitals treat disproportionately large numbers of uninsured patients. The logic underlying this decision was that if there were fewer people who were uninsured due to the individual mandate, then the federal government would not have to compensate the hospitals for costs of treating them.

Unfortunately, the tax reform bill did not restore the funding for these hospitals. If newly uninsured people seek treatment at these hospitals with no way to pay for the services they receive, the hospitals could become financially strapped and eventually close. If that happens, medical services in a geographic area could be affected, particularly in rural areas where services are already sparse.

Complicating matters further, these bills cannot pass out of the Senate without the votes of five minority party members, which is not likely to happen without concessions from both parties.

How will the eczema community be affected?

The funding for federal programs and agencies that benefit eczema patients could be in serious jeopardy if Congress attempts to resolve the deficit primarily through spending cuts. Two of the bigger impacts could include:

The seriousness of these challenges has led some to question whether Congress can do the heavy lifting necessary to get these bills onto the president’s desk, raising the specter of an even bleaker outcome: a government shutdown in which payments to Medicaid and Medicare providers would be suspended.

Past government shutdowns have usually been resolved swiftly, but a prolonged shutdown could lead some providers to stop providing services to Medicaid and Medicare beneficiaries until the government resumes payment.

How does step therapy legislation affect people with eczema?

Outside of the appropriations process, NEA is closely following the progress of a bill that would regulate insurers’ use of step therapy protocols. Step therapy is a graduated form of treatment in which insurers require patients to try a milder and often, less expensive drug, before their doctors can prescribe more potent or expensive medications.

Critics of step therapy protocols complain that insurers often use it to discourage patients from trying to get the correct medications prescribed to them by their doctors and that there needs to be serious restrictions on its use.

Representatives Brad Wenstrup (R-Ohio) and Raul Ruiz (D-Calif.) introduced H.R. 2077 in 2017. This bill would require insurers to base any step therapy or “fail-first” decisions on strict clinical guidelines and/or peer-reviewed journals.

It would also exempt patients from step therapy requirements if taking a different or “preferred” drug could 1) cause an adverse side effect 2) be ineffective based on the drug’s known clinical characteristics, or 3) the patients had already tried and discontinued it under previous health care coverage, due to lack of efficacy or an adverse side effect.

NEA believes this bill would establish a rational set of guidelines for exempting patients from insurers’ step therapy requirements, and we support it in its current form.

How do I become an advocate for eczema patients?

We predict that 2018 will be a year of opportunities and challenges for the eczema community and invite our members to join us in advocating for federal policy outcomes that benefit people with eczema.

Raise your voice in support of people with eczema by clicking on this link and registering as a grass roots advocate today. Visit the resources page on NEA’s website to find our more about picking the right coverage option for you.