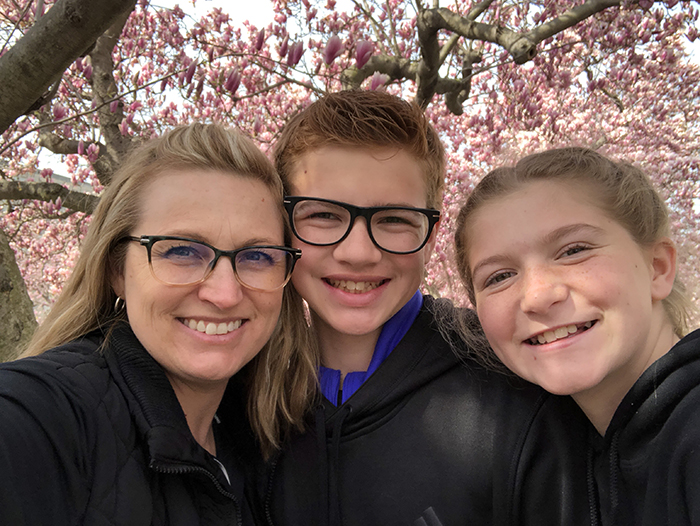 No matter how tired she is or how drained she feels after a long day at work, Shellie Rucinski never skimps on helping her 11-year-old daughter, Grace, with her nightly skincare routine.

“A consistent routine helps Grace get through it when her eczema flares up,” said Rucinski, an engineer with the Department of Energy living in Henderson, Nevada. Day to day, that routine centers on keeping Grace’s skin moisturized. But during a flare, Grace’s mom brings out the big guns, including bleach baths, steroid creams, extra moisturizer and cotton gloves.

“Sometimes it itches so bad that I don’t even realize I’m scratching,” Grace said. “Wearing gloves reminds me not to scratch.” 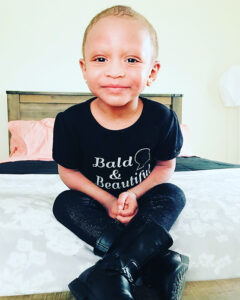 Brittany Douglas’ 2-year-old daughter, Brielle, is too little to wear gloves, but Douglas—a nursing student from Rocky Mount, North Carolina, who works at two dialysis clinics—knows a thing or two about patient care, especially when the patient is her own child. She uses a combination of over-the-counter creams and home remedies to keep Brielle moisturized and comfortable at night.

And during the day, she distracts the toddler from her itchy skin with a wealth of activities, such as coloring, making pretend food with her toy kitchen set and helping her mom clean up around the house.

Both Rucinski and Douglas continue to rely on trial and error as they navigate the maze of treatment options for their children’s eczema.

Trial and error has also helped adult patients like Amy Gyps deal with her itchy skin using a treasure trove of approaches, including diet, yoga, meditation and a soothing bedtime ritual.

Putting on her cotton gloves before bed serves as a signal that it’s time to wind down, she said. “I keep plenty of water and herbal tea on hand, and I listen to meditation music for about an hour before sleep.”

Her favorite remedy of all? When itch and stress start getting the better of her, Gyps watches funny YouTube videos!

The science behind the itch 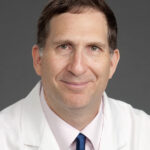 At his dermatology practice in Miami, Dr. Gil Yosipovitch often steers his patients toward dietary and lifestyle changes, along with over-the-counter and home remedies to keep itch at bay. But he’s also committed to getting to the bottom of the biology of itch. The treatments of tomorrow will come from a thorough understanding of the mechanisms that drive itch, he said, adding that such an understanding is already starting to pay off.

“We used to believe that an overactive immune system alone was responsible for eczema,” said Yosipovitch, “but that’s only half of the story. Today, we know that the condition involves cross-talk between nerve cells and immune cells.”

Nerve cells are the immediate drivers of itch, while immune cells secrete the inflammatory molecules, called cytokines, that play an important role in eczema over the long term, he explained.

Surprisingly, cytokines aren’t only found in immune cells; they’re also found in nerve cells in the skin. That discovery, he said, has been critical to a new understanding of eczema and to recent progress in the development of new drugs.

Yosipovitch, a professor of dermatology at the University of Miami Miller School of Medicine and director of the Miami Itch Center, pointed out the speed with which nerves transmit itch to the brain. For an eczema medication to be effective, he said, it needs to work on itch by targeting the nerves and on the rash by targeting particular cytokines produced by immune cells.

“In eczema, it’s as if the nerves in the skin are a faulty electrical wiring system that’s always on. The light never goes off. The nerves perceive even non-itchy stimuli as itchy. It’s a phenomenon called neural sensitization,” Yosopovitch said.

Dupixent, the first biologic drug to be approved for moderate to severe atopic dermatitis, targets IL-4 and IL-13, cytokines found along the eczema pathway. But the drug also influences the nerves in skin, taking down neural sensitization and calming the perception of itch, Yosipovitch said.

“The good news is that biologics that target other cytokines implicated in eczema are on the way. That’s going to result in more and more treatment choices and a significant reduction in itch for more and more patients,” he said.

In the meantime, Yosipovitch—affectionately dubbed the “Godfather of Itch by his colleagues—encourages patients to keep exploring their options. Douglas and Rucinski are doing everything right for their kids, he said, adding that there’s no contradiction between Gyps’ holistic approach and evidence-based treatment options.

For example, he said, several topical treatments are known to reduce itch in many patients, including Eucrisa (crisaborole) and Protopic (tacrolimus).

“Eucrisa works directly on itch, while Protopic calms the overactive immune response. And then, of course, there are steroids, which reduce inflammation but don’t necessarily work on itch, at least not right away,” Yosipovitch said.

Every patient is different, he noted, which is why trial and error remains so important, whether it’s a matter of medication, diet, supplements, stress reduction techniques or skincare products.

Yosipovitch offers the following example showing just how different one eczema patient can be from another. “Some of my patients benefit from over-the-counter products containing menthol,” he noted. “These deliver a cooling sensation by activating cold receptors in the skin. However, some patients say that the cool feeling makes their symptoms worse. It’s a very individual thing.”

Bleach baths, wet wraps and daily moisturizing are all part of the mix, he said, offering a word of caution when it comes to skin care products. “I warn patients to pay attention to a little thing called pH. Human skin has an optimal pH of 5.5, meaning it’s fairly acidic,” he explained.

“But that number is elevated in people with AD. I tell patients to avoid anti-bacterial soaps and bar soaps generally, as these tend to be very alkaline and aggravate itch. It’s advisable to look for cleansers and moisturizers with a pH lower than 5.5.”

And as for home remedies, if they work, use them, said Yosopovitch, a physician-scientist whose top priority is an itch-free future for eczema patients everywhere.