Erika and AJ Go To Their First NEA Conference 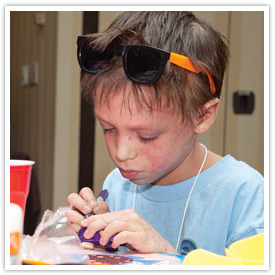 We were in a bad place with our son AJ’s skin when we saw a newspaper article that mentioned the National Eczema Association. We didn’t even know such an organization existed. For years we had been fighting AJ’s skin with nobody to help us emotionally or even medically. We had never even met another child with eczema. So we thought, what a great opportunity to get all of that in one weekend!

My husband, my mom, AJ, his little brother Jordyn and I packed our bags and headed to Atlanta for our first NEA Patient Conference! We were so excited because we wanted to understand and hear about eczema from the people who would know it best: the National Eczema Association. And that we did. It was the best overwhelming feeling we’ve ever felt! Steroids, calcineurin topical inhibitors, bleach baths, oh my!

My mother, my husband, and I really enjoyed the small group discussions. It was great being able to pick a topic you wanted to learn about more in depth and talk about it in a small group setting. The small groups gave us the opportunity to really ask questions and have conversations about different topics. It was also a great opportunity to get to know other people and their stories.

AJ’s favorite part about the NEA Kids Camp was having fun without worrying about people staring at him. He enjoyed being around other kids who understood exactly what he was feeling — and he even remembers a few of the kids reminding him to try to stop scratching when he didn’t know he was doing it. AJ enjoyed the trip to the Atlanta aquarium because he loves fish and has two fish tanks at home. And in case you were wondering, AJ’s least favorite part of the conference was driving to Atlanta and back from Chicago — in addition to the 108 degree weather in Atlanta! He says there’s no way we’re ever driving that long again, and we’re flying to the next conference.

“Instead of desperation, we felt hope.”

We would ABSOLUTELY recommend that a person or family suffering from eczema attend a NEA Conference! The NEA conference changed our lives and gave us a whole new perspective on this disease. We felt empowered to learn about and battle eczema. We now know we have an army behind us. The things we learned from each presentation and each doctor were invaluable. There are so many treatments and options for people with eczema — and we hadn’t even heard of half of them until the conference. Best of all, we felt that we were not alone. Instead of desperation, we felt hope. And although much research has to be done to better treat this disease, we feel comfort in knowing that there are some amazing researchers and doctors conducting clinical trials specifically for eczema as we speak.

Without attending the conference, we would still be in the same, desperate place. AJ’s skin was the worst it’s ever been, and I could no longer watch him suffer. We met Dr. Peter Lio at the conference, and although his practice is in Chicago (our hometown), we would never have crossed paths if not for hearing his presentation. His open-mindedness and interest in complementary therapies made him a good fit for us, and we are so happy to say that he is now AJ’s dermatologist. AJ trusts him and knows that he is helping us greatly with his skin. As an added bonus from attending the conference, I started a NEA Chicago Eczema Support Group when I returned home. It’s been great getting together with children and adults once a month to talk to others in Chicago about eczema.