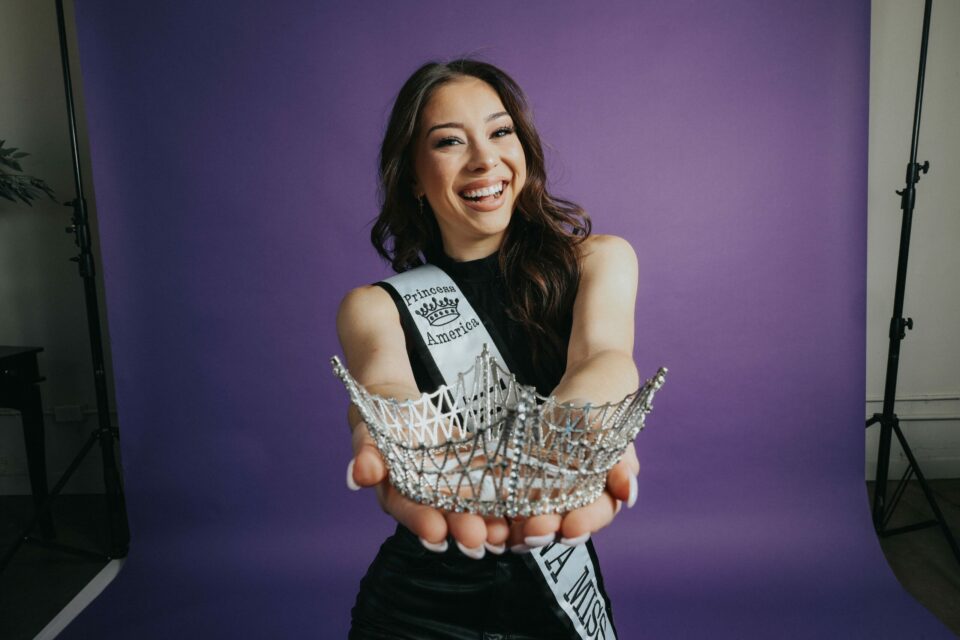 It started my first year of college. I had noticed symptoms of eczema on my face, especially around my eyelids. I was working as a server, and one day when I went into work my boss told me: “you can’t serve people looking like that,” and he sent me home.

He told me I should go to the emergency room. At first, I was lowkey offended, but when I got home my mom said the same thing: she told me it was time to go to the E.R.

Starting over again with a new perspective on beauty

After the E.R. my journey with eczema really started.

I didn’t really take it seriously at first, even though I’d just been hospitalized. I obviously didn’t feel pretty and didn’t really like going out. I couldn’t wear makeup. I just felt like a gross blob, ashamed, just disgusting.

My eczema was at its worst when I was competing in a weeklong pageant in Las Vegas. I had a spray tan before I went and had to use a “loofah” in the bath while my eczema was flaring, and that was my definition of hell for me. But I felt like I had to do it in the name of beauty.

Little did I know, my own story was right in front of my face. It was up to me to decide when to open that chapter of my story.

Choosing to be brave and bold, I shared my story

I was competing in a pageant in Las Vegas when I finally hit post and shared a picture of myself without make-up.

And then it started blowing up online, not even in just the pageant world or Louisiana, but across the world. It took only two weeks to reach 17,000,000 views on social media and it shot my followers number and DM numbers way up. I still have DMs from February I haven’t opened yet.

I begin receiving even more messages and comments from people saying that I was their saving grace; people would write to me and tell me that they had showed my video to their daughter with eczema and it made her cry because she felt seen.

This was a turning point in my life. I didn’t realize that sharing a story can help people who are in the exact same position that I was back then. Looking back, I wish I had seen a video of someone like me – someone living with severe eczema – so I would have known that I wasn’t alone.

During the three years after my first E.R. visit, I did patch testing several times to figure out what was messing with my skin. Having to wear those patches for a couple of days was an absolute nightmare. I couldn’t get my body to settle. The nights were the worst. I was at a loss. I felt like giving up. I was done fighting, done searching, done being hopeful.

Finding a treatment that finally worked

Then my dermatologist asked me if I had heard of Dupixent. She told me, “It’s an injection that heals the body from the inside out.” I truly did not even need her to explain the rest. I was so desperate that I did not care what the solution was. And I am privileged and beyond thankful that I was able to receive the “OK” from our insurance company to be on Dupixent.

After my first eczema post went viral, I started posting more and more videos that showed my skin as it really was. I hired a manager and now I’m working as an Influencer. I’m now a senior at Louisiana State University in Baton Rouge, and I’m looking forward to moving to either Nashville or Los Angeles after I graduate.

As I continue sharing my story, I’ve realized how eczema really is more than skin deep. It affects you physically and mentally. People do a really good job of hiding it mentally, because we can’t hide it physically. So many people edit it out too, and I so wish I had my old photos because I was guilty of that and nobody would’ve known.

If I could talk to a young person with eczema, like a version of me from back then, I would show them photos of myself and tell them how I know it’s really hard. But I would also tell them: you can handle this; you can still achieve whatever you want to achieve with what’s on your skin.

Don’t let your skin stop you.

And I would tell everyone going through this to look around you. There are people who want to help you. My boyfriend at the time … he was the one who made sure I stuck to my skincare routine, and my friend Ali Lee helped me so much. She’s been my make-up artist and hair stylist throughout all my pageants, and she’s encouraged me so much every step along the way.

If you were to tell me three years ago that I would be in the position that I am now, I would’ve never believed you.

Eczema played a huge part in my life and has changed me as individual. However, I cannot be more grateful for what I have gone through because it has shaped me into who I am today.

God gives his strongest warriors the toughest battles and I am proud to be an eczema warrior.