Everything you need to know about eczema and food allergies 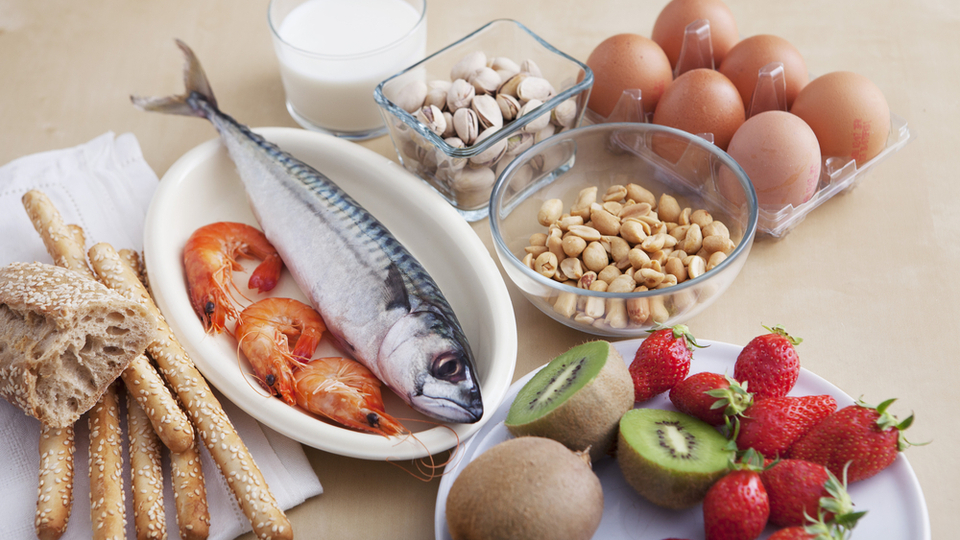 Even though 19-year-old Brandon Hipps of Avon Park, Florida, loves to go fishing with friends and family, he can’t eat what he catches.

In addition to living with moderate to severe atopic dermatitis, Hipps is allergic to seafood, peanuts and dairy. These foods, along with eggs, sugar, alcohol or gluten, tend to top the “do not eat” list among people with AD, who swear that consuming certain foods will trigger their skin to break out in an eczema rash. But is there really a correlation between eczema and food allergies?

According to Dr. Peter Lio, assistant professor of dermatology and pediatrics at Northwestern University in Chicago, founding director of Chicago Integrative Eczema Center and member of NEA’s Scientific Advisory and Board of Directors, the answer is yes.

Food allergies are considered an official comorbidity (related health condition) of atopic dermatitis alongside asthma, allergic rhinitis (hay fever) and depression. Researchers have found that up to 30 percent of people with AD also have food allergies, Lio said.

For some people, exposure to a single peanut becomes a life-threatening emergency that can lead to anaphylaxis and death without the intervention of an EpiPen. For others, eating certain foods like sugar, eggs or dairy won’t necessarily kill them, but causes their skin to erupt in a raging eczema flare.

As a result, they believe that if they could just cut certain foods from their diet, such as gluten or dairy, their eczema will go away. Unfortunately, said Lio, it’s not that simple. “The No. 1 question my patients ask is ‘Could this be related to food?’ And my response is generally this: ‘I wish it were!’

“For patients who have dermatitis herpetiformis (the specific skin condition related to Celiac disease caused by a specific reaction to gluten), it’s often very straightforward. If they avoid the gluten, the skin generally stays clear. But we’re not that lucky for eczema patients as they, by definition, don’t have this condition.” Lio said.

To better understand the relationship between eczema and diet, it is helpful to know the difference between food allergies vs. food sensitivities or intolerances.

A food sensitivity, or food intolerance, occurs when a person has trouble digesting certain foods. This can lead to gas, bloating, abdominal pain or diarrhea, for instance. A food allergy, on the other hand, provokes an immune system reaction that affects numerous organs in the body and can cause a range of symptoms, some of which are life-threatening.

“The key thing about bonafide food allergies is that they tend to be immediate (i.e., within minutes) of eating the food, and tend to be urticarial (hives) or anaphylaxis (swelling, vomiting, etc.),” Lio said.

However, that line between food allergies and food sensitives tends to blur a little bit for people with inflammatory diseases such as AD, Lio noted. Eating certain foods may not lead to anaphylaxis or organ failure, but it triggers an immune system reaction nonetheless, whether it’s eczema, asthma, allergies or arthritis.

“While there is no doubt a group who has an ‘eczematous’ food reaction that can take days to manifest, these seem to be pretty rare and are actually super hard to diagnose since there is such a time delay,” he said. “They tend to occur within hours (or at least within a day or two) of the food, and often seem to manifest as more of an eczematous flare-up rather than the specific hives.”

Adding to the mystery is the fact that there are some foods that seem to have an allergic-like effect but don’t show up on allergy tests, Lio said. “These triggers can be very tough to identify since sometimes patients report that when they are really flared up, almost anything they eat seems to make their eczema worse. I have seen cases in babies where it seems that the act of eating and digesting itself may have a triggering effect on the eczema, perhaps via some type of neuronal circuit.

“Interestingly, for many of these patients, once their inflammation goes down and their skin clears up, they can eat some or even all of the foods that were acting triggers before,” Lio continued “My thinking here is that when the skin is really inflamed, their threshold to flare is really low and many things can set them off. Once better, we can get a clearer picture of the more substantial triggers and continue to avoid them while [reintroducing] other foods.”

The dangers of elimination diets

From Atkins, Paleo and Keto to vegan, gluten-free and dairy-free, people with AD are not afraid to explore the latest dietary trends in hopes this will bring relief to their itchy or painful eczema rashes—often to no avail, Lio said.

“The internet seems full of folks who seem to have ‘cured’ their eczema with dietary change, and I am so happy for those folks! But sadly, I can swear on a stack of bibles that it does not help everyone and, unfortunately, those tend to be the folks who come see me,” he said.

“I’ve seen people do extremely restrictive diets for many months—sometimes so restrictive that they have other health issues—and their eczema persisted. I’ve seen babies that were fed only rice milk and began to develop kwashiorkor protein deficiency and still scratch and rub their skin.”

So, are people with AD wasting their time if they wish to make changes to their diet? Not necessarily, according to Lio. “Despite what might sound like cynicism here, I truly believe that a healthy diet is critical to good health and can be transformative for some patients,” he said.

“I think that dairy products and simple carbs (including all the wonderful things that contain gluten) and sugars can contribute to inflammation in a lot of folks. I think that eliminating dairy and carbs, processed foods in general, and eating mostly vegetables/plant-based foods with some meat and fish is probably very healthy for many people.”

The biggest takeaway when it comes to eczema and food allergies is to always consult with a trusted health care provider before making any drastic changes to your diet, Lio said.

“Many patients find that when they eat a ‘cleaner’ diet, everything gets better—not clear, mind you—but better, which is great,” he said. “With this as a background, maybe for a month or two to stabilize, I think that adults can then experiment with excluding foods that they think may be contributing to flares.

Watch What about the food? for more on the relationship between food and flares