Is it Eczema or Psoriasis? 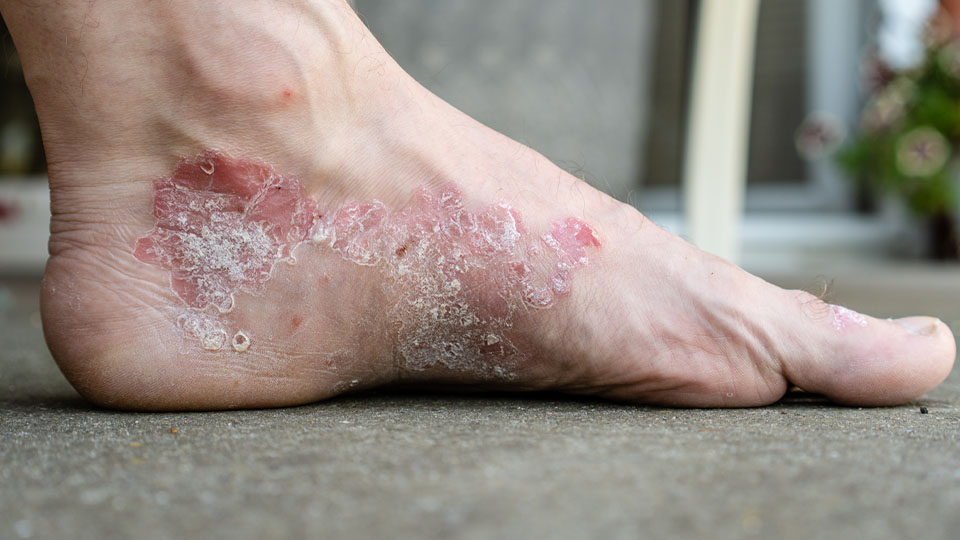 Ever wonder about the differences between eczema and psoriasis? Or have you tried to explain the two conditions to someone and found yourself getting confused? You’re not alone. Even the most skin-savvy of us can sometimes get these common skin conditions mixed up. So, with Psoriasis Awareness Month happening every year in September, we’ve outlined some key details to clarify things and hopefully help more people get the accurate diagnosis and treatment they need.

Causes of the Diseases

Eczema and psoriasis, while two distinct conditions, have something key in common. Both these diseases, says Dr. Amy Paller, Professor of Dermatology and Pediatrics at the Northwestern Feinberg School of Medicine, involve the human immune system, just in different ways. Neither is classified as strictly an autoimmune disease, however, since there can be other causes for both.

With psoriasis, the immune system is overactive in a manner that leads to the growth of too many new skin cells, too fast. These cells pile up on the surface of the skin, causing thick scales or plaques that can be dry, flaky and painful. Most types of psoriasis can be triggered or worsened by stress, skin injury, cold/dry weather, medications or infections. Genetics also seem to play a role with psoriasis risks “running” in families.

While experts don’t completely know what causes eczema, a combination of genes, immune system tendencies and triggers are believed to be involved. People with eczema tend to have overly-reactive immune systems that, when triggered by a substance outside or inside the body, respond by causing inflammation. Researchers have also found that some people with eczema have a mutation in a gene that plays an important role in the skin barrier — leaving the skin more vulnerable to dryness, irritants (like soaps, detergents, fragrances and certain fabrics) and allergens (like dust, pet dander and pollen). Similar to psoriasis, stress can also trigger eczema and family history can increase eczema risks.

While eczema and psoriasis are both somewhat common, according to the University of Pennsylvania Medical School, eczema is about four times more common (with eczema affecting 32 million people and psoriasis affecting 7.2 million). It is also possible to have both conditions but that’s relatively uncommon. One study found that just 1.4% of children with eczema also had psoriasis.

Both eczema and psoriasis can affect people of all ages, but eczema typically first appears in babies and children, while psoriasis tends to manifest later, often between the ages of 15 and 35. Indeed, “eczema is much more common in children than psoriasis,” said Dr. Stuart A. Cohen, Assistant Professor with the University of California San Diego, Department of Pediatrics. The American Academy of Dermatology reports that only 1% of children have psoriasis and other experts indicate psoriasis is rare in babies. Children with eczema may find that their symptoms go away or improve as they get older, while psoriasis tends to be more of a lifetime condition.

At first glance, the dry rashes of eczema and psoriasis can look similar. When you look closer, there are often telltale differences between the similar symptoms of these two conditions.

Eczema: In children: dry skin, scaly skin, red patches on pale skin or rash, grey or ashen colored patches on Black or brown skin with eczema. In adults: there may also be patches of thicker, rougher, darker, leathery skin. Both children and adults may experience oozing and weeping of clear fluids from inflamed areas, with resulting crustiness. Eczema causes the skin to sometimes become inflamed or swollen.

Psoriasis: Well-defined, layered, scaly patches overlying redness. Scaling or “plaques” can be silvery, white, or red. Skin tends to be thicker, raised, and more inflamed than with eczema because psoriasis symptoms cause an excess buildup of skin cells that the body can’t shed quickly enough.

The location of rashes on the body is often a differentiator between these skin diseases.

With eczema, especially in children, symptoms most often appear in the skin folds or “crooks” of the body, particularly along the creases of the elbows, knees, wrists, neck, and ankles. Babies may also get eczema on the chin, cheeks, scalp, chest, arms, and legs. Adults are more likely to have symptoms on patches of skin on their faces or hands.

Psoriasis, while potentially appearing anywhere on the body, is more likely on the outer edges of the elbows, knees, scalp, palms, lower back, soles of the feet, ears, mouth, eyelids, buttocks, or nails.

Both eczema and psoriasis can cause itchy skin, but eczema, said Dr. Cohen, “may cause an intense itch while psoriasis causes more of a burning or stinging sensation or mild itch.” Indeed while eczema is typically very itchy, especially at night and in children — to the point of disrupting sleep — psoriasis may not cause itchiness at all.

There are no cures for eczema or psoriasis, but various treatments can be used to provide symptom relief and to help to prevent flare-ups of either condition.

Working with your dermatologist is the best way to find the treatment options that can bring your skin symptoms under control. This may involve a combination of over-the-counter skin products (like moisturizing emollients and topical corticosteroids), prescription skin products, avoiding triggers, and having a good skin care regimen and healthy lifestyle. Skin products are particularly good for calming eczema or psoriasis flares.

“Topical steroids have been the workhorse treatment for both psoriasis and eczema,” said Dr. Paller. “Other medications that broadly suppress the immune system, whether oral or to be applied to the skin, can work for both. However, newer agents that are more ‘targeted’ to the now-known underlying cause of these two inflammatory disorders are more specific for psoriasis or eczema by suppressing specific arms of the immune system.”

In severe cases, psoriasis can turn into psoriatic arthritis. When this is the case, a medicine such as methotrexate or cyclosporine may be recommended by a doctor to help manage symptoms. Be sure to ask about all potential ointments and creams available to help your skin rashes.

Clearly, there’s a lot more to the psoriasis vs. eczema question than meets the eye. But regardless of which condition you have, or think you have, we know that the challenges of both conditions can run deep on patients and their caregivers. We hope that this article inspires you to talk to a knowledgeable healthcare provider to find the best treatment plan for you.