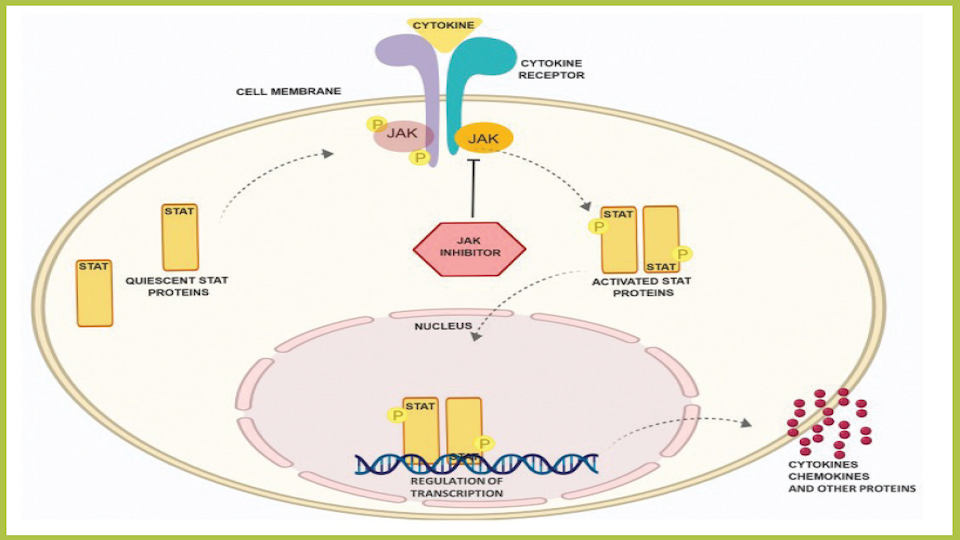 There are some exciting developments ahead in the field of eczema research.

Aside from the topical phosphodiesterase 4 inhibitor Eucrisa (crisaborole) in 2016 and the biologic Dupixent (dupilumab) in 2017, many years have passed since any revolutionary new therapies for atopic dermatitis (AD, or eczema) have been evaluated by the U.S. Food and Drug Administration (FDA) for use by this patient community.

But now, after 20 years of research,1 there is a new class of medications headed to the FDA for review with the potential to help people with AD find relief and keep their symptoms under control. The Dermatologist2 notes these medications “are likely to be the next generation of agents FDA approved for the treatment of moderate to severe AD.” The Journal of the American Academy of Dermatology3 reports this is “a promising new class of medications.” While the British Journal of Dermatology4 says, “We are on the verge of major breakthroughs in the treatment of atopic dermatitis.”

Here’s what all the excitement is about.

Researchers believe that AD is caused, in part, by immune system messengers called cytokines that are increased in the blood and skin. Several of these inflammatory cytokines exert their effects through a chemical signal pathway inside our cells known as the JAK-STAT pathway (Janus Kinase-Signal transducer and activators of transcription). These JAK enzymes can play a role in driving abnormal immune responses and have been found to be key components of several complex immune-mediated diseases including rheumatoid arthritis, psoriatic arthritis, ulcerative colitis and now, AD.

New medications called “JAK inhibitors” are used to close off overactive JAK pathways and to limit the cytokines associated with turning on eczema symptoms. The JAK family has four members and JAK inhibitors can target one or more of these family members to hinder their effects, leading to improvement in signs and symptoms of AD. “JAK inhibitors block nerve itch signals, are anti-inflammatory, and they work quickly,” says Eric Simpson, MD, professor of dermatology at Oregon Health and Science University. Similar to biologics, JAK inhibitors can help combat AD at the immune system level and, according to Dr. Simpson, they may be able to do so more broadly than a targeted biologic can, given their ability to inhibit the effects of several cytokines.

For AD, JAK inhibitors are being investigated in both oral and topical dosage forms. While the FDA has already approved oral JAK inhibitors to treat rheumatoid arthritis, psoriatic arthritis and ulcerative colitis, no JAK inhibitor, either oral or topical, has been FDA-approved for the treatment of AD — yet. Four JAK inhibitors are currently in the end stages of clinical trial investigation (i.e. Phase III) for AD:

Abrocitinib, baricitinib as well as upadacitinib are intended to be dosed orally, and ruxolitinib topically. Both approaches, Simpson says, “appear to have very clean safety and tolerability profiles.”

While the above are the four JAK inhibitors furthest along in development, Jonathan Silverberg, MD, associate professor and director of clinical research at the George Washington University School of Medicine and Health Sciences, predicts “at least four other JAK inhibitors are expected to be evaluated by the FDA in the next five years.” In fact, the JAK inhibitors represent one of the largest therapeutic pipelines for AD with numerous oral/topical JAK inhibitors in some stage of clinical development at present.5

While each JAK inhibitor has its own unique profile, the current efficacy data is significant, according to Simpson. “We have seen itch reduced in the first three days [of oral therapy] and within as few as 12 hours for the topical, with significant clearance in four weeks,” he says.

Indeed, clinical trial data6-13 (see citations to the most recent published study results, below) shows that the four JAK inhibitors closest to market have provided study participants with a number of benefits including:

Side effects have included nausea, swelling of the nasal passages and the back of the throat, headache and upper respiratory tract infections. Simpson elaborates, saying: “With the pills, a little bit of headache nausea and acne were reported, but these are likely to lessen with time, and, in studies, they were mild and didn’t usually lead to people stopping the treatment.”

Experts have already begun to speculate about the ways JAK inhibitors could contribute to the future of AD management pending FDA approval, while also recognizing there will be a learning curve around optimal use for different patients, as well as more long-term effectiveness and safety information (for all age groups) to be gained over time. “I think JAK inhibitors will be important additions to our toolbox for eczema, but there is still much to learn about the best candidates for JAK therapy,” Silverberg says. “The oral JAK inhibitors are anticipated to be approved for moderate to severe AD with inadequate response to topical therapy. The topical JAK inhibitors may be useful in mild, moderate or severe AD.”

“Oral dosing,” he continues, “will likely be more effective than topical. It’s also easier and less time consuming to swallow a pill than applying a topical medication to large areas of the body. On the other hand, topical therapy will lead to minimal or no systemic absorption, and ultimately better safety and tolerability.” As one or more JAK inhibitors may also be approved for pediatric patients, “our younger patients may tolerate these drugs very well with minimal short-term adverse events,” according to Silverberg.

As we head into the New Year, we’re excited and hopeful to have these new eczema therapies on the horizon. With more treatment options to choose from, eczema relief for many more patients may become a reality.