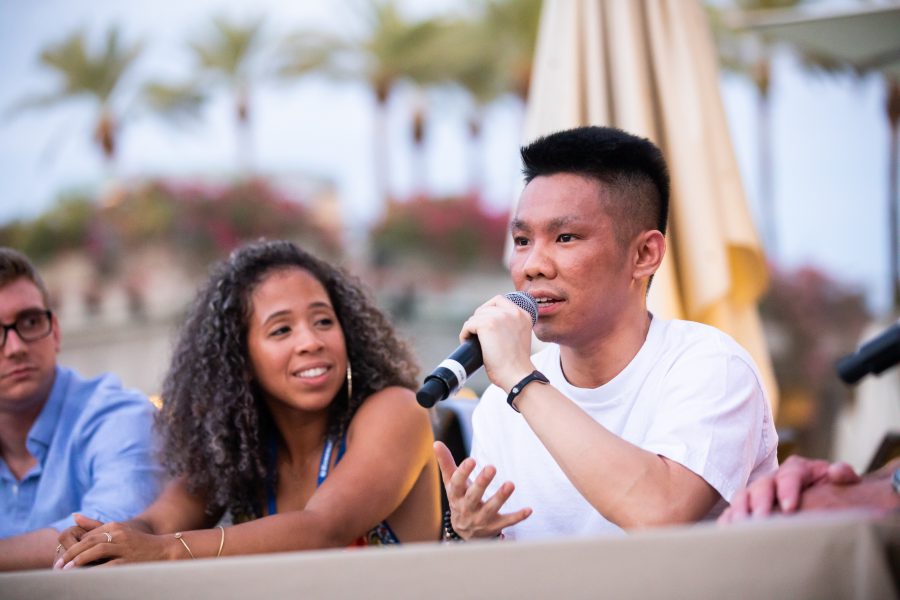 Harry Do, a 23-year-old from Gainesville, Georgia, has been living with eczema since he was a few months old. It was mild in his early years, but as he entered his teens, he began having flares of severe atopic dermatitis (AD) that took away the natural confidence he’d had as a child.

“As soon as I started high school, I became more aware of my skin, more self-conscious and more insecure,” Do said. “Living with it, answering questions about why my skin looked ‘sunburned,’ started to become much more emotionally draining. Depression came and went like waves.” 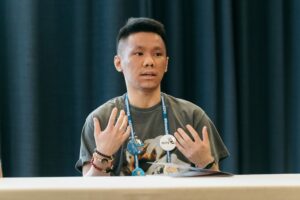 Potent topical corticosteroids were his main treatment. Do, who is of Vietnamese ancestry, says he felt that, at times, he was under- or over-treated because the dermatologists he was seeing weren’t used to the way AD looked in his Asian American skin.

“I felt that they weren’t able to judge how flared I was due to hyperpigmentation on my face and being less familiar with how that looks in darker skin,” Do said.

Although treatment for eczema doesn’t vary with ethnicity — medications have similar efficacy and safety across ethnic groups — the skin condition often looks quite different in more richly pigmented skin, that can make it harder to diagnose, according to Andrew F. Alexis, MD, MPH, professor of dermatology at the Icahn School of Medicine at Mount Sinai in New York City.

“In other words, there’s a broader palette of color in eczema in darker skin, and redness and inflammation may not be as easily discernable to healthcare providers.”

Eczema can vary by ethnic background

Alexis, director of Mt. Sinai’s Skin of Color Center, says that the 20-year-old center, the first of its kind, was created to address distinctions in skin type that can change how dermatological conditions are diagnosed and treated.

In dermatology, “skin of color” means the skin of anyone with non-white ancestry. It’s important because, historically, white skin was the default used to teach medical students how to recognize and treat skin conditions, Alexis said.

“That means the language and the images in textbooks have historically had a Eurocentric approach,” he said.

“We’ve now recognized that there are a number of educational, research and therapeutic gaps when it comes to skin conditions that affect patients of color. Our center has worked to close these gaps by raising awareness of the diagnostic and treatment nuances that can exist among people of different ethnicities.”

How eczema appears on skin of color isn’t the only clinically meaningful feature of the disease that can vary with ethnic background, said Mamta Jhaveri, MD, MS, a board-certified dermatologist and assistant professor of dermatology at the Johns Hopkins University School of Medicine in Baltimore, Maryland.

“Melanin, the pigment that gives skin its color and that varies in amount and type among people of different ethnicities, is very sensitive to inflammation,” she explained. “That means that people of color are more likely to develop hypo or hyperpigmentation — lightened or darkened areas of skin where the eczema has been and remain after it has gone.

“People with darker skin types also seem more likely to have papular eczema [small bumps on the torso, arms and legs] and to develop follicular prominence or bumps around hair follicles.”

In addition, she said, African American skin is often drier than other skin types, which makes the moisturization that helps keep symptoms in check even more crucial.

People of color often have more severe courses of AD, including more intense itching that can lead to chronic scratching and scarring, said Jhaveri.

Alexis noted that studies show African Americans with AD use more healthcare services for the skin condition, indicating a greater burden of disease.

The reason isn’t completely understood, but Alexis thinks hypo and hyperpigmentation may be contributing factors. The pigment changes are often more noticeable — and therefore more disfiguring — in skin of color.

“Pigment changes can affect quality of life,” he said. “If they involve arms or legs, patients may not feel comfortable exposing those areas, for example. This can mean they skip social events or aren’t comfortable with certain activities like swimming because of unevenness of skin tone.” 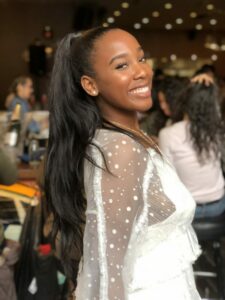 Mercedes Matz, diagnosed with eczema at 6 months old, doesn’t remember a life without severe AD. She has hyperpigmentation and scarring from the years she struggled to bring deep itching, that caused “hours of scratching with no relief” and other symptoms, under control.

“My skin is 1,000% better than it used to be. With the help of my dermatologist and an interleukin blocker [a biologic medication first approved for eczema in 2017], I don’t get flares as frequently as before, and if I do, they’re fairly mild,” said Matz, 25, who is African American.

“I think, just like anybody, I have days when I wish I had perfect skin. Then I reflect on where I used to be and how my skin was, and I’m grateful for where it is now.”

Once eczema is resolved, both hypo and hyperpigmentation eventually fade on their own (usually in six months to a year), and there are some medications that can help lighten darker areas.

Matz has tried lightening creams, but because she still has eczema in the hyperpigmented areas, they haven’t had much of an impact.

Early and ongoing treatment can help prevent pigment changes and scarring, according to Alexis and Jhaveri. “The earlier we treat eczema, the less pigment alteration patients will have,” Jhaveri said.

Alexis emphasized the importance of keeping up eczema care even when skin isn’t flared. “There’s a need for continuous control of this chronic condition, including appropriate skincare, moisturization and bathing practices,” he said.

“With these practices, along with the appropriate medication for the individual patient, we can control the condition effectively over the long term. When we do that, we can minimize the development of pigmentary changes and allow for the resolution of those changes.”

Lean on NEA for support

Perhaps most important is healing from the emotional scars of eczema. Both Matz and Do have found that connecting with others through the National Eczema Association (NEA) has helped them build confidence and self-acceptance.

“I’ve learned through my eczema peers that telling other people about the condition is therapeutic,” said Do, whose retail job allows him to share his love of fashion — especially sneakers, which he collects.

“Through NEA, I’ve met people who had the same condition as me and we just started talking,” said Matz. “Although my skin was still the same, I no longer felt isolated. Just having someone who ‘gets it’ was life changing for me.”

Matz and Do also recommend finding a dermatologist who is committed to working toward your goals for your skin and your overall health. Together, they have seen dozens of dermatologists, and both have struggled to find an eczema specialist who “gets” them and their skin.

Matz found a dermatologist who inspired his trust just three years ago, and the results have been lifechanging. Do is still looking, but he isn’t giving up until he finds the right therapeutic fit.

To find a healthcare provider near you with experience treating eczema, check out NEA’s Provider Finder .