Advice for teens with eczema from those who’ve been there, done that 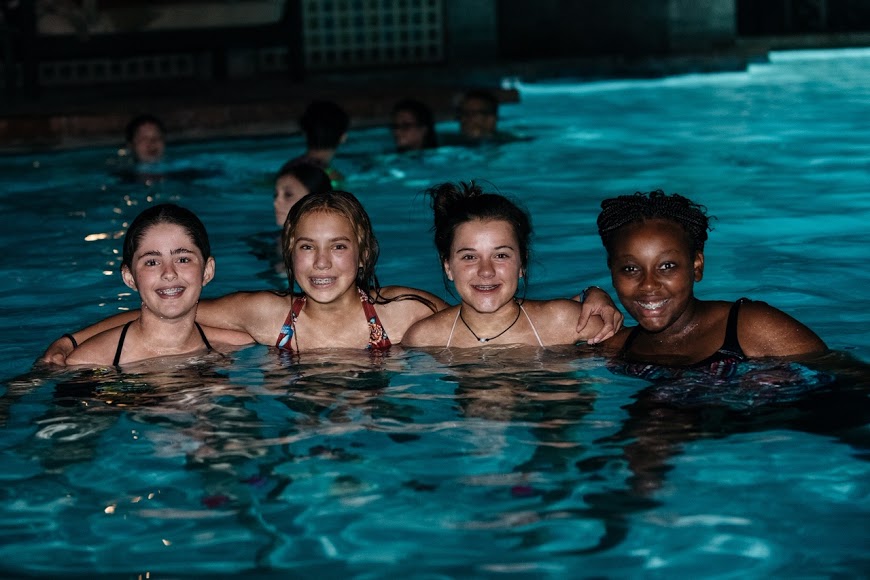 Being a teen is tough enough, as you learn to juggle more challenging classes, more time-consuming extracurricular activities and more complicated social interactions. Atopic dermatitis (AD), the most common form of eczema, can magnify that stress—turning everyday tasks into major obstacles.

“As a teen with eczema, I wanted to disappear when I was struggling with a flare,” said Kristin Boelter, a 24-year-old from Chicago who has dealt with eczema her entire life. “When you’re irritated, it’s exhausting to take on normal daily activities.”

Eczema impacts every aspect of a teen’s life from what you wear, to where you go, to how you feel. Your parents probably helped manage your AD for you when you were a child, but now that you’re getting older and gaining more independence, your skin becomes your responsibility.

Learning to take control of your eczema is an important part of transitioning from adolescence to adulthood, and there’s a lot to learn from others who have survived those awkward teenage years.

Often diagnosed during early childhood, AD is an inflammatory skin condition that typically manifests in dry, itchy, inflamed patches of skin along with related health conditions such as asthma and allergies. The pain of severe flare-ups can seriously derail a teen’s daily schedule.

“Flare-ups and even regular itches make simply existing more stressful than it ought to be,” said Tyler Berryman, a 25-year-old from Michigan who has had eczema his whole life. “Everyone learns to ‘grin and bear it,’ but you have to do it while dealing with the very real discomfort of a flare-up that you cannot immediately heal.”

To make matters worse, even simple everyday objects and activities can trigger eczema and the allergies that accompany it—making the average teenage lifestyle feel like an obstacle course.

“Teens with eczema find themselves facing daily questions that most wouldn’t think twice about,” Boelter said. “Should I wear this outfit, or will it make me uncomfortable? Can I wear makeup today or will it cause a flare? Will I be able to get through sports practice? Is it noticeable that I can’t stop itching?” 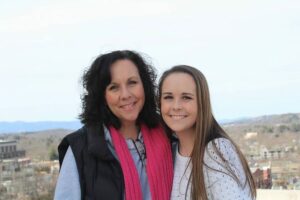 AD can sometimes be “the uncomfortable answer to many questions” when teens get invited to events or activities that might trigger a reaction, said Stephanie Knox, whose 16-year-old daughter Paige was diagnosed with eczema as a baby.

When friends ask Paige if she can go to the beach, help with a carwash fundraiser, go horseback riding or just spend the night, she has to consider how her eczema might react.

“Most kids can just jump in the shower and head out to a social event, but she has to have excuses ready,” Knox said. “Eczema is always at the front of her mind and impacts every decision.”

For example, sweat is a common eczema trigger that can make teens with eczema think twice about sports, especially when scratchy uniforms are involved.

“Maybe you don’t want to join the football team because the pads are sweaty, and they’ll stick and rub,” said Berryman, who played soccer, tee-ball and other youth sports as a young child but gave them up because the sweat irritated his skin.

“Having to avoid triggering activities creates extra pressures for teens with eczema. You steer yourself away from things without really being aware of it.”

But don’t let eczema stop you from doing things you enjoy, he added. Berryman took up swimming for a couple of years in high school. As long as he applied plenty of moisturizer, the chlorine in the pool actually calmed his skin. He also participated in marching band, even though the woolen uniform irritated his skin.

Boelter, meanwhile, pursued cheerleading. Since her squad stretched in the grass before practice, she brought towels to sit on so the grass wouldn’t make her itchy. She couldn’t wear makeup like the other cheerleaders because it would cause her to flare. But it didn’t stop her from making the varsity cheer team her freshman year.

Bearing the stress of eczema

After puberty, Berryman’s eczema moved from his arms and legs to his face and torso, making the visible impact of his condition harder to hide from his peers.

“The social consequences of eczema are often the hardest part of teen life. There were times when you’d want to go talk to that cute girl you like, and she gives you a funny look because half your face is red,” said Berryman, who studied optical engineering at the University of Rochester in New York and now works in Silicon Valley.

“It just compounds the already natural self-consciousness that any kid in high school has, and it adds extra social pressure to scenarios that are already tough enough.”

These embarrassing experiences add stress during a traditionally stressful age, which can exacerbate eczema even more. Tyler urged teens with eczema to prioritize their care and comfort first, “and worry about social concerns second.”

“If someone gives you a funny look, that’s not your problem,” he said. “It may certainly feel like your problem, especially when you’re self-conscious. But at some point, you just have to roll with it and keep going on with your day.” 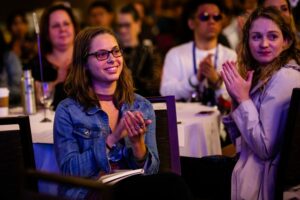 As a child, Boelter used to isolate herself and avoid social activities during flares. As she grew up, she discovered healthier ways to handle the stress of eczema. The first and best defense, she advised, is “to get as much sleep as possible, as it’s your body’s natural healing state.”

But that’s easier said than done, especially when the itch keeps you awake at night. Finding other ways to relax is critical to breaking the cycle between stress and eczema.

“When I’m stressed or having trouble taking my mind off the itch, I’ll pray, use a meditation app or read. All of these things help me relax,” Boelter said. “Find something you love that is eczema-friendly and spoil yourself with it. I like to watch a movie with my favorite snack and an ice-pack.”

Several studies suggest connections between severe eczema and mental health issues like anxiety and depression. Research indicates that teens with eczema are more likely to have suicidal thoughts or attempt suicide. To manage these emotions, find someone to share your feelings with, whether it’s a parent, a friend, a counselor or NEA.

“It’s hard to talk about mental health, but it’s so important to reach out and talk your struggles through with someone you trust,” Boelter said. “As a teen, you’re constantly worrying about what others think when it’s much more important to focus on yourself.”

Every morning, Berryman abides by a simple but critical skincare routine to keep his eczema in check—starting with a shower, followed immediately by topical corticosteroid on problem areas, then a layer of moisturizer all over.

He repeats this process as needed after workouts or before going out. He also gives himself a weekly biologic injection. He said the sooner teens can develop a routine that works for them, the better off they’ll be.

“Teens need to learn time budgeting to plan skincare into their schedules. It’s a prerequisite to getting ready to go out, so it should be treated as a necessity, not a chore,” Berryman said. “Although this mental transition is difficult for teens, it’s key in easing the transition of responsibility away from your parents.”

Of course, teens tend to rebel against anything their parents tell them to do regularly, even if it’s just a reminder to apply more lotion or stop scratching.

“As a teenager, you bristle at that because you’re like, ‘No, it’s my skin, it’s my problem. I don’t have to listen to you,’ even though what they’re saying is the right thing to do,” said Berryman, who finally came to grips with his skincare regimen after meeting adults through NEA who had their routines down and their eczema under control.

“The longer you put off shouldering the responsibility, the worse your problems are going to be,” he said. “There’s no reason why you should avoid things that you have to do to make yourself feel better.”

A big part of taking responsibility for your own eczema care is paying attention to your skin and what triggers your flares. 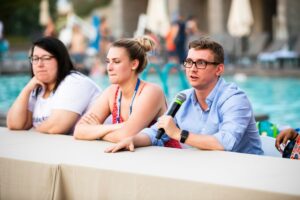 “My best advice to teens is to keep track of your most common triggers,” said Berryman, who also has multiple food allergies in addition to AD and asthma. “Knowledge is power, and for the eczema patient, it’s also safety. It’s extremely important to know how a serious reaction begins to manifest so you can avoid the worst of it.”

For Berryman, this means asking about ingredients when he eats at restaurants and keeping EpiPens on-hand just in case.

Boelter keeps a journal to track what she eats at the recommendation of her dietician. She also adds notes about environmental factors that might cause a flare, like visiting a friend’s house where she’s around dogs.

“Don’t deny your symptoms,” she said. “I was denying my triggers because I didn’t want them to be true. But journaling about things that I thought might irritate my eczema really helped me monitor my environment and reduce my chances of triggering a flare. I have never felt more in control of my skin than I do now.”

The teenage years can be tricky. Learning to manage a chronic condition like eczema makes growing up seem even more daunting. But Knox suggests looking at it this way: Eczema gives you the strength to endure challenges that other teens will never understand.

“Your battle with eczema [can] empower you to overcome obstacles and be a successful adult,” Knox said. “Your journey can be unpredictable, but no matter how it flows, your ability to care for yourself will empower you.”

Boelter said AD has forced her to grow up faster—developing her character and giving her a greater sense of empathy toward others. Her advice to teens with eczema is to focus on the positives.

“Don’t get discouraged. It’s easy to get upset and wallow in it for a while, and that’s

OK, but don’t get stuck there,” she said. “You can only start with small steps, so break it down into manageable tasks that allow you to feel like you’re in control. Every little adjustment works together to help you feel more comfortable in your skin.”

As you make the transition to taking control of your own eczema care, Berryman said to remember you’re never alone. Don’t be afraid to ask for help when you need it.

“Teens need to know that the transition, while daunting, is far from impossible, and leaning on others does not make you weak,” he said. “Just take one day at a time, keep going, and you’ll get through it.”

Picture Perfect: Learning to love the skin I’m in