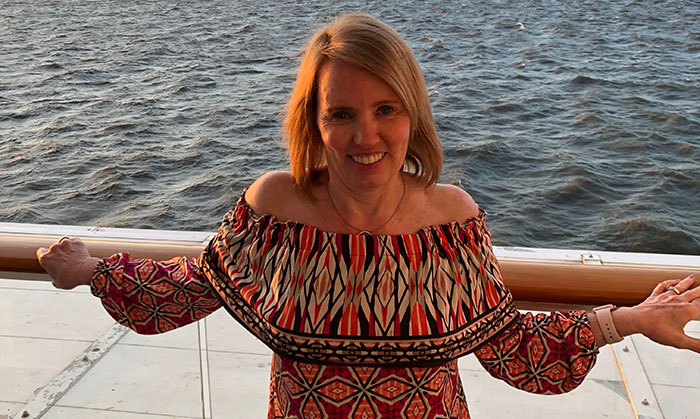 Everyone with atopic dermatitis (AD) has a story to tell.

Mine is no longer about suffering with AD. It’s about the peace, joy and friendships I have found because I have this dreadful disease.

If people had told me 10 years ago that someday I would be happy because of my atopic dermatitis, I never would’ve believed them, but it’s true. The reason is that I learned how to manage my AD, which, for too long, had a devastating effect on my life. My story is about how this disease has changed me for the better. I’m more confident, positive and outgoing.

Nearly a decade ago, I was in a new city enjoying the challenges of a career change. My three children were independent young adults preparing to leave the nest for college. My husband and I looked forward to that next phase of life — empty-nesting.

This is about the time when my life turned upside down. My childhood disease, atopic dermatitis, returned with a vengeance. I thought I could control it like I had done before, but this became something much worse. I didn’t know then that it would change my life in ways I never imagined.

It seems strange to think that something so horrific could be a blessing, but that’s how it turned out. It wasn’t all about the sleepless nights, constant itching, painful and burning skin from head-to-toe. It was about taking control of this disease and owning it.

When I finally accepted the fact that it was going to be a fight like no other, I put every ounce of strength into beating this disease and focusing on all the good that came from it.

Finding people who understood atopic dermatitis became my mission. It was not an easy task considering I did not know one person in San Antonio, Texas, who had AD, nor anyone in the world for that matter.

After months of research, I found the National Eczema Association. It was like finding a pot of gold. I attended NEA’s “Itching for a Cure” fundraising walks, patient conferences and forums.

I surrounded myself with people who were just like me. Instantly, I formed a bond with those people that brought a sense of relief to me. Those newfound friendships gave me peace and happiness and began to fill a void in my life.

I mastered the skill of “networking” by cultivating those friendships and working hard to build new ones. I volunteered to speak about the disease, write about it and promote public awareness.

One thing led to the next, and before long, I realized I had friends all over the world who were connected to this disease one way or another. I accepted every opportunity I got to travel and spread the word about AD. On a recent vacation through Europe with my husband, I connected with people there whom I had met at a NEA event years ago.

My dark and lonely days with this disease have faded. I’ve learned how to manage my AD and feel a sense of pride for how I’ve handled it. My life has taken on a new dimension. It warms my heart when I go to AD events and bump into people I’ve met before at conferences or forums. I’ve discovered that I’m part of one big family — all of us passionate about helping others who suffer from this.

I never realized until I became involved with NEA and started speaking in public about this disease how much I was actually keeping to myself. I thought I was doing a good job over the years of telling my family and friends what I was going through. When they hear me talk about it now, they say I never really shared with them how much I was suffering.

The opposite is true now. I enjoy telling my story, because I want to be an inspiration to others fighting this disease. I will continue to do my part to increase public understanding of AD and the need to find a cure.