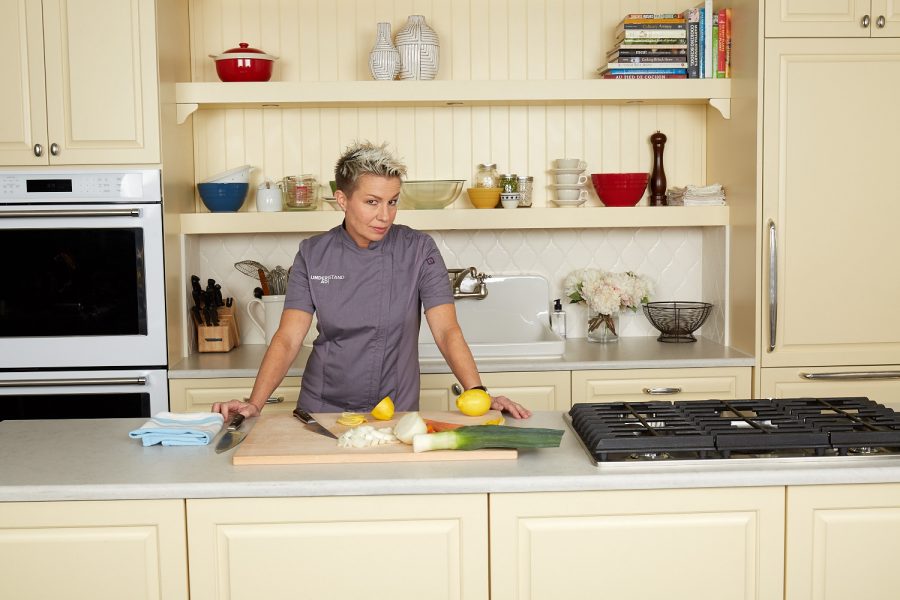 If you identify as a foodie, you’ll probably recognize Elizabeth Falkner and her trademark spikey blonde locks.

The award-winning restauranteur and culinary expert has appeared as a competitor and sometimes a judge on popular cooking shows like “Top Chef,” “Iron Chef America” and “Food Network Challenge.” She also was the first American to win the “Freestyle Neapolitan Pizza” category of the World Pizza Championship in Naples, Italy, in 2012.

The legendary pastry chef has been a long-time advocate for females in the culinary arts. A firm believer in physical fitness, she played soccer for 28 years, tackled her first marathon in 2016 and is highly skilled at the sword-fighting fitness program known as Jungshin.

Now she’s taking the literary world by storm with two cookbooks under her apron and plans to publish her autobiography soon. In her memoirs, Falkner reveals something highly personal about herself. She’s been living with moderate to severe atopic dermatitis (AD) for most of her life.

It wasn’t until 20 years ago, when she was in her 30s, that Faulkner finally received a proper diagnosis. She remembers a doctor advising her to give up her culinary career. Yeah, right! Telling Elizbeth Falkner to stop cooking is like telling the grass to stop being green. “I’m like, ‘Well that’s the stupidest thing I’ve heard,” she says with a laugh.

Falkner suspected something was awry with her skin while playing soccer in her youth. But at the time, she shrugged it off as “skin guard rashes” and never gave much thought the other symptoms of AD, such as allergies.

“But then things got really bad when I was cooking on the line,” Falkner recalls. “I started getting bad lesions on my hands. It was so uncomfortable because, as you can imagine, being a chef, I was using my hands all the time.”

Not only was it physically painful for Falkner to be cooking with eczema on her hands, she also felt self-conscious and worried that people would see her handling their food and assume she had a contagious disease. “I’d be like, ‘Yeah, I know it looks gross. But it’s not contagious,” she says. “I’m a type A personality, so I just sort of pushed through it.

“I’d tell myself, ‘Oh, I don’t care what they think. I know I’m going to make killer food, and that’s going to win them over anyway.’”

The most frustrating part of AD, Falkner admits, is never being able to find long-term relief.  “Everything that I’ve put on top of my skin doesn’t really help me,” she says. “It’s temporary, maybe, but it’s always coming back. Emotionally, that’s really hard for me; it probably is for everybody. It’s something that’s not just physically affecting you, but psychologically affecting you for the rest of your life.”

Speaking up meant speaking out

The hardest part of living with AD, according to Falkner, is the isolation it brings. She often felt like she didn’t have anyone to talk to about it. But in hindsight, keeping her hardships to herself and not talking about AD with anyone was her way of staying in denial about the seriousness of this disease.

“I’ve done a lot of things in my career to postpone my emotionally dealing with it,” she says. “Your skin is your biggest organ and to have something like this happen to your biggest organ is a big deal. This clearly isn’t something just on the outside. I’ve been trying to treat it for this long on my skin, but it must be something coming from inside.”

Falkner knows how important it is to spread awareness about this chronic, inflammatory disease, which is why she was the 2016 Understand AD Ambassador. Understand AD is a national awareness campaign and educational program sponsored by Sanofi and Regeneron Pharmaceuticals, Inc. in partnership with the National Eczema Association. For more information, visit UnderstandAD.com.

“It’s very comforting for me to have this discussion about AD because I don’t think people around me have really understood just how painful it is,” Falkner says. “Atopic dermatitis is more than skin deep. Having this disease can get in the way, but try not to let it get in the way of the things you love to do.”