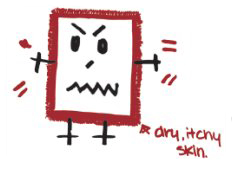 Pruritus (itch) is a common symptom among dermatology patients. “It’s one of the biggest problems that patients have,” said Ethan Lerner, M.D., Ph.D., associate professor of dermatology at Massachusetts General Hospital.

Patients may have an inflammatory skin disease such as psoriasis or eczema or systemic conditions such as kidney or liver disease. “Those don’t necessarily come to the attention of the dermatologist unless they’re referred by someone else because they don’t really have spots on their skin for the most part,” Dr. Lerner continued.

Although dermatologists’ knowledge of itch has been limited, along with their ability to help affected patients, that situation is changing. “I think that nowadays we are more capable and understanding what is behind itch, so we can help our patients,” said Gil Yosipovitch, M.D., professor and chair of the department of dermatology at Temple University in Philadelphia; director of the Temple Itch Center; and author of Living With Itch: A Patient’s Guide.

Itch can significantly impair patients’ quality of life, leading to sleep disturbances, mental health issues, and other difficulties. Furthermore, the incidence of pruritus increases with age.

“Just imagine if you had mosquito bites or poison ivy covering a large portion of your body 24/7 and there was no end in sight to the itching,” said Julie Block, chief executive officer of the National Eczema Association.

“The prospect of that is completely unimaginable, but that’s life for the more severe eczema patients,” she said. “Sleep deprivation is probably one of the greatest overall impacts of itch. What follows from that are depression, anxiety, low self-esteem, relationship issues, and isolation.”

Furthermore, Block explained, severe itch in children leads to sleep deprivation and impacts the entire family. Loss of sleep leads to social and academic problems for the child and challenges for parents and siblings who also have lost sleep and are anxious and worried about the affected child.

“I would say that the majority of chronic itch patients will tell you that in the evening and at night the itches intensify,” Dr. Yosipovitch said. “It causes significant impairment of quality of life, and it’s a vicious circle. The more you lack sleep, the more you’re itchy. You’re more depressed. It has an effect on mood. It has an effect on self-esteem.” In extreme cases, he said, the effects can lead to suicide.

“Many dermatologic conditions have itch as a central symptom, if not being the most debilitating symptom in that context,” said Brian Kim, MD, MTR, assistant professor of medicine in the division of dermatology at Washington University School of Medicine in St. Louis and its Center for the Study of Itch. “A good example would be eczema or atopic dermatitis, but there’s also a number of people who have itch with no clear cause and this is actually quite frequent.”

Previously, experts believed that that the same pathways that mediate pain might also mediate itch and, therefore, blocking all neural pathways might alleviate itch. “I think the most explosive move forward has been in the last several years with the identification of itch-specific receptors on sensory neurons,” Dr. Kim said. Such discoveries have provided evidence that itch is a distinct pathway from pain — not just a mild form of pain, he said.

One challenge in investigating itch is the lack of specific assessment tools. “We have multiple scales that have been used by various investigators, but there is no standardized measurement that everybody can agree upon that can be utilized in clinical studies and in presenting data to the FDA,” Dr. Lim said.

The Temple Itch Center uses a numeric visual analog similar to the pain analog commonly used, where patients are asked about the severity of itch on a scale of 0 to 10. “Patients can say, I have horrible itch,’ but you want to get some kind of quantitative assessment,” said Dr. Yosipovitch, who founded the multispecialty International Forum for the Study of Itch in 2005 to promote better understanding of itch. He has also found the visual analog scale helpful when using electronic health records.

Although some studies have investigated pruritus by assessing the number of scratch marks, people can have severe itch without scratch marks, Dr. Yosipovitch said.

Because there are many types of itch, no single treatment fits all cases.

“I think that if you don’t have any treatments in your armamentarium that are universally effective, you tend to shy away from managing it,” Dr. Kim said.

In addition, the broad nature of the condition makes it difficult to address. “It’s hard for us as clinicians to even understand what itch really is. If you contrast that to, say, psoriasis, where we see it, we can biopsy it, the pathologist will confirm the diagnosis, and now we have treatments for psoriasis that are quite targeted,” Dr. Kim said.

“There are some specific targets that we look into. First of all, most of the itch in chronic itch is not mediated by histamine, which was the classical prototype,” Dr. Yosipovitch said. “Antihistamines are the most commonly used medications because these are the only ones approved by the FDA.” However, the effects of antihistamines are limited.

Topical treatments target skin receptors, such as the transient receptor potential (TRP) ion channels or TRPVI and TRPA1 associated with the itch of eczema, Dr. Yosipovitch said. Topical menthol or cooling may help reduce itch through other TRP channels. For itch with dry skin, the upper layers of stratum corneum are damaged; this may be relieved by certain moisturizers, he said.

Compounds such as capsaicin and a combination of lidocaine and prilocaine with amitriptyline and ketamine target the ion channels, Dr. Yosipovitch said.

Additional topical agents such as strontium and pramoxine numb the nerve fibers and reduce itch. “Most of them work on these ion channels,” Dr. Yosipovitch said.

In addition, dermatologists also turn to systemic medications to treat the neural system. “The common pathway of all itches is transfer of nerve fibers to the spinal cord and up to the brain,” Dr. Yosipovitch said. “The concept of reducing itch by mechanisms of drugs that work on the neural system is extremely important.”

In cases of central sensitization, patients may develop a chronic itch that no longer is simply in the skin, Dr. Lerner said. “So the neural networks or nervous system is trained to think, correctly or incorrectly, that there’s an itch, and when that happens, putting something on the skin isn’t going to help so much,” he continued. For example, chronic conditions like notalgia paresthetica and brachioradial pruritus have neuropathic origins.

In chronic itch patients, hypersensitization phenomenon is common. Nerves react even to non-itchy stimuli, in which case some dermatologists may use medications that target the neural system. “Some of these drugs, such as gabapentin or pregabalin, are given for neuropathic pain and hypersensitization of pain, and they have the same effect for itch,” Dr. Yosipovitch said.

In addition, Dr. Yosipovitch and his colleagues also use mirtazapine, a norepinephrine and selective serotonin inhibitor, which he discussed with Tejesh Patel, MD, in Expert Opinion on Pharmacotherapy. “It reduces itch, not specifically, but it reduces that sensitization, and it enables the patients to sleep better and have less itch at night,” he said. “Sometimes the combination of it with gabapentin and pregabalin is even better.”

Mu-opioid antagonists may reduce chronic itch in some cases, but results have not been consistent in uremic patients. However, nalfurafine hydrochloride, a kappa-opioid agonist, was approved in Japan but is not available in the U.S. It is given to patients with uremic pruritus who are receiving hemodialysis.

Dr. Yosipovitch has prescribed butorphanol, a mu-opioid antagonist and kappa-opioid agonist, in an inhaled form for intractable itch. He and Aerlyn Dawn, MD, reported on this in the Journal of the American Academy of Dermatology in 2006. However, this is another drug type that dermatologists are not accustomed to prescribing.

In addition, researchers are exploring the use of botulinum toxin for pruritus, injecting it locally, Dr. Lerner said.

In treating severe pruritus, clinicians often tell patients not to scratch, but this is a powerful compulsion in patients with itch. In addition, researchers have found that scratching an itch targets brain areas associated with reward, Dr. Yosipovitch said. If researchers could mimic the same brain response with future medications, they may be able to reduce itch, he said.

Researchers continue to focus on treatments that will target the specific pathways associated with itch. “There’s so much understanding now about the pathways involved in itch, and some of that learned from work that’s done in the pain field, that I’m truly optimistic that we will have targeted therapies,” Dr. Lerner said.

“We have a very interdisciplinary program, and what we’re finding now is that when we do combine all of our skill sets and our techniques and our technologies, we’re able to do things that we never really thought of before,” Dr. Kim said.

“I think we’ve had the tools to do this for a while now,” Dr. Kim said. “It’s just that people have not really looked at itch as a distinct discipline, disease, and if you don’t conceptualize it that way, it’s really difficult to tackle the problem.”

Although treatments for conditions such as eczema and psoriasis block the inflammation, it is not known whether symptoms improve because the drugs broadly inhibit the inflammation or the itch itself. “That has yet to be determined, but I think in some respect we could see some things in the next five years,” Dr. Kim said. “I think other areas are going to take longer because it’s such an uncharted frontier in terms of research.”

Despite these efforts, however, it is unlikely that researchers will develop a universal treatment to relieve pruritus. “Not all itch is equal,” Dr. Yosipovitch said. “Chronic pain could be from a lot of causes and the same with chronic itch.”

Patients may go to great lengths to find a clinician who can provide relief of itch. “I’ve treated a lot of other conditions in the past, but half my patients are coming from hours away, driving from six hours away, flying in from the coast and I’m in St. Louis,” said Brian Kim, MD, MTR, assistant professor of medicine in the division of dermatology at Washington University School of Medicine in St. Louis and its Center for the Study of Itch. “I think that’s very striking.”