Leaky Gut: Does the Concept Hold Water or Is It Full of Holes? 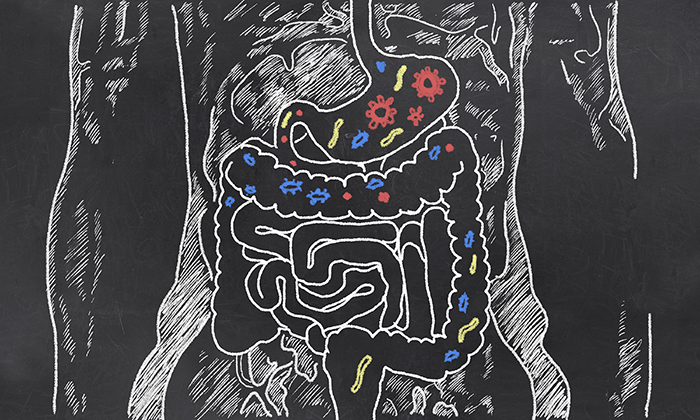 The exciting developments in understanding of filaggrin and related proteins in atopic dermatitis (AD) have led to a deeper understanding of the central importance of barrier function in this disease.11 Along with skin barrier dysfunction, it has been postulated that there is compromise of the intestinal permeability barrier in AD as well. Many clinicians employ elimination diets—ostensibly in hopes of avoiding food allergens or triggers—and often report positive results from their afflicted patients despite fairly convincing evidence that dietary exclusion does not seem to benefit unselected patients.12 Directly or indirectly, the implication of the gut in AD has been very difficult to shake, with patients often insisting diet is the “root cause.”13

Another very recent study found a strong correlation between a gut bacteria called Faecalibacterium prausnitzii and AD, and that these patients had markers of gut epithelial inflammation, which can lead to barrier impairment.10 While these represent correlative data, they raise the important question of the clinical implication of leaky gut in these patients, particularly as we learn more about the role of transcutaneous sensitization in AD, secondary to what might be dubbed “leaky skin.”16

Armed with these fundamentals, we now move into the more clinically relevant realm: If leaky gut is indeed involved in the pathogenesis of AD, can it be treated? The answer seems to be “yes,” although with qualifications.

Diet has been implicated in the development of both leaky gut and AD and is a provocative place to start. Parents often note an association between certain foods and flares of AD.17 When tested, some 39 percent of families recognized improvement in their children with AD following an elimination diet, although this remains a confusing and controversial area.18 Historically, the thinking has been that food allergies (present in about 30 percent of children with AD versus only 10 percent in non-atopics) may be driving the skin disease.19

Indeed, food allergies have been shown to cause inflammation within the gut, altering the complex intestinal barrier. One small study evaluated 15 children with atopic dermatitis and subjected them to a two week elimination diet where they were only allowed to consume a highly restricted group of foods. Interestingly, nine of the 15 patients had a significant reduction in clinical eczema scores and mean intestinal permeability in responders was lower when compared to that of non-responders.20 While studies suggest that only 40 percent of children with atopic dermatitis that are food sensitized actually have specific signs and symptoms of food allergy, these findings raise the idea that perhaps there are other mechanisms at play beyond simple IgE-mediated allergic responses.17

Greater knowledge of the gut-skin connection has led to introduction of probiotic therapy in the management of AD. This concept relies on gut biodiversity and/or the presence of certain beneficial organisms as critical components to immunologic well being.

Perturbations in gut microbacterial diversity may inhibit the maturation of the T-regulatory cells causing Th1 and/or Th2 induced inflammation.22, 23 While the overall body of data on probiotics and AD remains somewhat unclear, the consensus currently states that probiotics are not effective for the treatment of established AD but may be helpful in prevention. However, there is the suggestion that the non-uniformity of the results from the many studies belies a more complex answer: not as simple as “probiotics are not effective”, but that there may be different phenotypes of the disease which respond more favorably than others; depending on the preponderance of the phenotype studied, the results could vary greatly.24

One double-blind placebo controlled crossover study administered two different strains of lactobacilli probiotic to 41 children with moderate to severe AD for six weeks. Ultimately, 14 patients had lactulose-mannitol excretion tests after placebo, and after active treatment to assess intestinal permeability. Median lactulose excretion decreased by 50 percent following treatment with probiotics, suggesting a significant improvement in gut barrier.24 Another study of 39 infants with AD were randomized to receive lactobacillus rhamnosus GG for three months, and the major groups of gut and skin bacteria were characterized using PCR along with several immune indices. At one month, the proportion of IgA- and IgM-secreting cells decreased significantly in the treatment group, thought to indicate an improved gut barrier function in those patients who received the probiotic.26

It is important to note that many unknowns remain here: the appropriate strain, dose, and duration of probiotics for AD still require a great deal of elucidation, but there is certainly promise in probiotic therapy.

Newer physical modalities may also be of benefit in conditions that result from possible compromise of the gut barrier. Gelatin tannate is one such agent that, through its chemical structure, may be able to form bonds with mucin within the mucus layers of the gut barrier.4 In addition to its physical activity in preventing contact of commensual organisms with the adaptive immune system, gelatin tannate acts as an astringent and can complex pro-inflammatory mucus-related proteins for elimination.25 This may prove to be a viable option for treating impaired barrier function, perhaps akin to a topical moisturizer for the skin.29

Atopic dermatitis remains a complex, multi-faceted disease. Despite its increasing prevalence and concomitant growing scientific interest, there are still many unanswered questions. Leaky gut represents a thought-provoking notion that has diagnostic and therapeutic ramifications, but raises many questions. More studies are required to determine if leaky gut is universal in AD or if there are specific subtypes/phenotypes for which it is relevant, and what approaches will yield the most improvement. Until then, as with all poorly-understood entities, we must keep alert for connections and observations that will guide future questions and research directions, and perhaps most of all, keep listening to our patients.

Peter A. Lio, M.D. is Assistant Professor of Clinical Dermatology and Pediatrics-Dermatology at Northwestern University Feinberg School of Medicine. Karan Lal, MS-4 is at New York Institute of Technology College of Osteopathic Medicine.