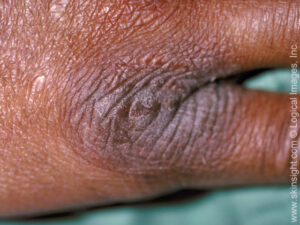 Intense itching — and the scratching it causes — lead to the symptoms of neurodermatitis, a common type of eczema that affects about 12% of the population.

Unlike atopic dermatitis, which can be widespread, neurodermitis is usually confined to one or two patches of skin. It rarely goes away without treatment, and continued scratching can irritate nerve endings in skin, intensifying both itching and scratching.

“Extremely itchy patches of skin cause patients to scratch even when they don’t realize it, and just telling them to stop isn’t realistic,” said Dr. Gil Yosipovitch, professor and director of the Miami Itch Center at the Dr. Phillip Frost Department of Dermatology and Cutaneous Surgery at the University of Miami Miller School of Medicine in Florida.

Yosipovitch, who has used brain imaging to study the urge to scratch in patients with chronic itching, explained that scraping at the skin lights up the brain’s reward center.

“In some sense, scratching is pleasurable, not that you want to do it, but that it provides relief and satisfaction,” he said. “This helps explain why it can become a habit that often happens unconsciously, and why this itch-scratch cycle is hard to break.”

Over time, chronic scratching causes itchy patches of skin to become dry, leathery and thickened. This is called lichenification, and neurodermatitis is also known as lichen simplex chronicus.

Itching can come and go or be active all the time. “People often feel itchiest when they’re relaxing or trying to sleep, or when they’re stressed or anxious,” said Yosipovitch.

Quality of life can also suffer, and itching can disrupt sleep and interfere with sexual function, Yosipovitch said.

Who gets neurodermatitis and why

Psoriasis and anxiety disorders increase risk. “Research and clinical experience suggest certain personality types are more prone to developing neurodermatitis,” said Yosipovitch. “These include having stronger tendencies to conform or be a ‘people pleaser,’ to hold in emotions, or to be excessively dutiful.”

Neurodermatitis can also be triggered by tight clothing (particularly when made from wool or synthetic fabric), bug bites, nerve injury and dry skin.

Treatment for neurodermatitis is aimed at healing skin and ending the itch-scratch cycle.

Dermatologists often use corticosteroids to help calm inflammation and itch and soften thickened skin. These are usually potent topical steroids, but if the skin is very thick, your dermatologist may inject a steroid into the patch.

Non-steroidal topicals such as calcineurin inhibitors and ointments made with salicylic acid can also be used to control itch.

Occlusive treatments that cover the affected area can help control itching and make it harder to scratch. These include applying plastic wrap after putting on topicals or moisturizer or using gauze treated with zinc oxide paste.

Some oral medications can also help stop the urge to scratch, particularly when it happens during sleep. These include prescription antihistamines, which can cause drowsiness, and low doses of anti-anxiety medications.

Certain patients may benefit from counseling or cognitive behavioral therapy to help address anxiety and other emotional issues contributing to the itch-scratch cycle.