What is Atopic Dermatitis?

Atopic dermatitis (AD) is a disease that causes itchy, inflamed skin. It typically affects the insides of the elbows, backs of the knees, and the face, but can cover most of the body. AD falls into a category of diseases called atopic, a term originally used to describe the allergic conditions asthma and hay fever. AD was included in the atopic category because it often affects people who either suffer from asthma and/or hay fever or have family members who do. Physicians often refer to these three conditions as the “atopic triad.” AD is not contagious. Research indicates that atopic diseases like AD are genetically determined, inherited from one’s parents. A child with one parent who has an atopic condition has a one in four chance of having some form of atopic disease. If both parents are atopic, the child has a greater than one in two chance of being atopic. 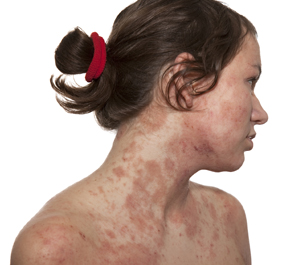 AD almost always begins in childhood, usually during infancy. Its symptoms are dry, itchy, scaly skin, cracks behind the ears, and rashes on the cheeks, arms and legs. It alternately improves and worsens. During “flare-ups,” open weeping or crusted sores may develop from scratching or from infections. Often the problem fades during childhood though people with AD have a lifelong tendency to have:

Children affected by AD may suffer from asthma and hay fever at the same time, or one or both of these conditions may develop later. These diseases usually appear before age 30 and often continue throughout life.

AD is a very common disease, present worldwide, though it is more common in urban areas and developed countries. An estimated 10 percent of all people are at some time affected by AD (this may not apply in the tropics). It affects men and women of all races equally.